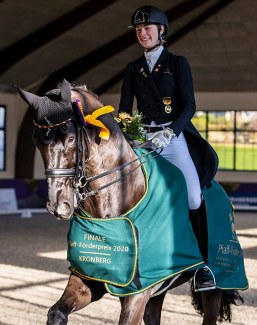 Despite being a leading dressage nation and have created an Under 25 show circuit as the first country in the world, Germany still didn't have an official, annual German Under 25 Championships.

With the Piaff Forderpreis, a German show circuit for Under 25 riders based on selections at an annual training seminar in February, has been up and running for 19 years (since 2001), there seemed to be no need for a "German Under 25 Championship," until now!

An overall champion based on combined scores will not be named.

Riders eligible to compete in the 2021 German Under 25 Championships are NK1 U25 squad listed riders, the participants of the 2021 Piaff Forderpreis show circuit and five extra combinations nominated by German U25 team trainer Sebastian Heinze.

"I'm happy that the Under 25 division develops well and we can give these developing riders a big platform with the 2021 German Championships at the fun show in Balve," Heinze commented. "Even though we have a very good position internationally, we can not rest on our laurels as the competition abroad gets stronger all the time."