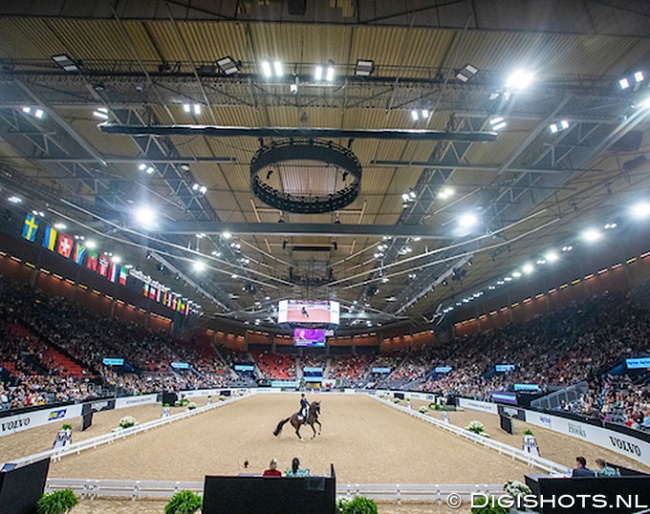 The FE has quietly published the update rules of participation for the 2021 World Cup Finals in Gothenburg, Sweden, in April 2021.

The 2021 World Cup Finals will be dominated by European riders as the FEI decided to give three starting places, which were normally designated for a non-league rider, a home athlete, and one extra starting place (based on the FEI World Riders List), to riders of the Western European League.

According to Dressage-News the FEI decision was posted on the body’s rules section with no publicity.

Eighteen riders compete in the annual World Cup Finals: 9 spots go to Western Europe League riders,  2 to the Central Europe, and one for the defending titleholder (Isabell Werth).

Three new slots from the Western European League will take up 15 of the 18 starting places. They come at the cost of the non-league competitor, one extra starting place, and a home athlete.

The remaining three will be for North America (2) and for the Pacific League (1).

There are four geographic leagues for the World Cup format: Western Europe, Central Europe, North America and the Pacific. In addition one spot was reserved for a “non league” rider.

Due to the corona pandemic many World Cup qualifiers across the world were cancelled. So far only one has been held in Western Europe in 2020 and two more are scheduled in 2021 (Salzburg and 's Hertogenbosch) out of a total of 10.

The Central European League was able to host almost all of its qualifiers.

The Pacific league held no qualifiers in the 2020/2021 season due to Covid-19 situation. One starting place in the Final is given to the highest ranking Pacific League horse/rider combination, who fulfilled WC Minimum qualification criteria for 2020-2021 WC season.

In the USA four qualifiers have been held and three more will follow in the next three months in Florida.

In the updated rules, the FEI states that the results of the CDI-W Vilhelmsborg will count as qualification in case Salzburg and Den Bosch end up being cancelled as well:

"If due to Covid-19 situation only one (1) WC Qualifying Event is held in the WEL in the current season the reserve temporary amendments plan will be used and only one result obtained in the qualifying events will count in the WEL Standings List."

Furthermore, the FEI stated that two scores from a CDI-W as well as a CDI3/4/5*/CDIO can count as minimum qualification for the Final, instead of just from a CDI-W.

In order to fulfil the Minimum qualification criteria for the WC Final in the 2020-2021 season In order to qualify for the Final or a League Final an athlete horse/combination must have started and completed at least two times in the Grand Prix Freestyle to Music in a CDI-W/CDI3/4/5*/CDIO with a score of at least 68% in the period starting from 01.01.19 and finishing at the date of definite entries for the WC Final .

This qualification period has also been extended to include results from 2019!

An athlete may only participate with one horse in the Final. He/she may select the horse of his/her choice, with the restriction that the horse must have scored at least 68% two Grand Prix Freestyle to Music competitions in a CDIW/CDI3/4/5*/CDIO on two different occasions in the period starting from 01.01.19 and finishing at the date of definite entries for the WC Final

The European flavoured 2021 World Cup Finals will have a reduced geographic spread of competitors, going against the grain of the FEI's mission statement of inclusion and globality.

Dressage-news mentions this decision was taken to potentially save money. "Organizers pay transportation," Dressage-news' Ken Braddick wrote. "The Gothenburg organizers have already indicated there likely will be no spectators that typically cover about 80% of the costs of staging the event."

However many riders would also self-fund their journey to the Finals if it gives them the opportunity to compete.

Yvonne Losos de Muniz, who rides for the Dominican Republic and is based in Wellington, Florida, was preparing for the 2021 World Cup Finals as a non-league rider. She had competed at the 2018 and 2019 World Cup Finals and already won the World Cup qualifier held in Wellington in December 2020 in the lead-up to the Finals. She will be riding her KWPN mare Aquamarijn (by United) in the CDI-W's in January-March in preparation of Gothenburg.

"I'm extremely disappointed to learn of these surprising rule changes. If fairness, universality and development of our sport are goals for our governing body, this surely sends the opposite message," said Yvonne Losos de Muniz.

The IDRC confirmed to Eurodressage that they were not consulted about the 2021 World Cup Finals. It is not the first time that the FEI has been charged with covert decision making and closed circuit communication.

Many riders complain that they are not consulted in the rule making process. The source of this disgruntlement could be either the failed communication line between them and their national federations or the line between the riders and their stakeholders' club, the International Dressage Riders Club (IDRC).

Outgoing IDRC secretary-general Wayne Channon wrote in December 2020 that, "almost all of the information the IDRC Board gets from the FEI is designated by the FEI as confidential. Even the public minutes from the Dressage Committee are only approved by the FEI to be sent to Members. The FEI is overly secretive and this has an impact on the ability fo the IDRC Board to discuss openly."

Channon continued, "at some point, riders have to take a strong view on this and petition the FEI to be more open - too much is done behind closed doors."

The decision making process of the FEI Dressage Committee has been cloaked in confidentiality and riders usually find out about new rules post-factum, when the deed is done.

At the 2020 IDRC General Assembly a new Board of Directors was elected to bring some fresh blood to the club succeeding a board that had worked hard on voluntary basis for 10 years.