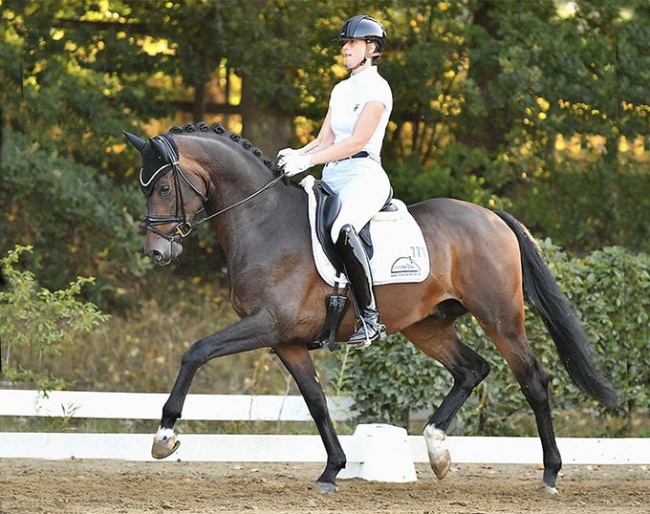 Ikon is by Ibiza out of Havanna Byager (by Hotline x Alabaster). He is bred by Niels Therkelsen in Denmark and was originally named Ibizkus Byager.

He sold as a 6- week old foal to American Laura Brandt who was interested in having an offspring out of Havanna's damline. Grand dam Alikantje produced the internationally competed Grand Prix horse Herzregent (Mateusz Cichon).

The bay stallion was sent to Johannes Westendarp to be prepared for the 2019 Oldenburg Stallion Licensing in Vechta, but he was not accepted by the committee.

Ikon was then sent into training with David Taylor, where the Oldenburg Licensing Committee accepted him for breeding in a private licensing.

Upon his licensing, the horse underwent a name change and got registered as "Ikonic" with the German federation as his breeding name.

In 2020 Brandt moved the horse to Anna Mitter (née Neubauer) for further training upon the recommendation of California based trainer Markus Gribbe.

Mitter made her show debut on the stallion, whose sport name is "Ikon 15" with the German federation. The pair first competed at the local show in Huge, where they finished second. At the 2020 Oldenburg Young Horse Championships they placed fourth.

He was selected as second reserve to represent the Oldenburg breed society at the 2020 Bundeschampionate in Warendorf.

With the turn of the year, owner Brandt has decided to sent her stallion to Helen Langehanenberg for training. The German Olympian accepted the horse into her barn.

"I have always admired Helen's riding," Brandt told Eurodressage. "I literally emailed an "info at" email I found on her website that I googled (late one night after a cocktail) and did not expect a response.  However, she did respond and the next thing I knew she was trying Ikon at Anna's stable.  She rode him beautifully with so much feel.  I had other offers for him..to purchase, which we turned down, and to stand at stud, but we chose to send him to Helen for further education.

Although licensed, Ikon has mainly been focused on sport and a breeding career is secondary.

"I will decide where he will stand at stud when I can personally get to Germany again, which is hopefully soon, once the Corona Crisis is under control," said Brandt. "I need to see for myself the breeding conditions, etc.  I will put my own 2 mares in foal to him though in 2021 for sure.  Both are OLD State Premium mares and both are highly graded."

The plan is for Ikon to stay in Germany with Helen indefinitely. He will have another stallion test in January.

"I hope she will do some Bundeschampionate qualifiers, but it is entirely up to her and what is in the best interest of Ikon," said Brandt, who is a real estate agent in California. "Anna delivered Ikon to Helen personally and has been an amazing professional to Ikon and me personally.  Many people do not know this but she also had Ikon's father Ibiza in her stable, when he was younger.  She is a lovely person and a fantastic rider!"