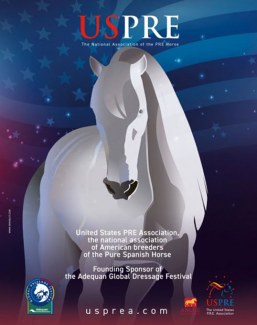 2021 USPRE Week with its traditional activities and events in Wellington, Florida, are cancelled this year due to corona virus concerns.

"USPRE will continue to sponsor The Grand Prix and Grand Prix Freestyle as usual during Week Three (3), and will use the opportunities our sponsorship allows to promote our PRE Horse in exhibitions and competition to the equestrian community at Global Dressage Festival 2021," a spokesperson of the US PRE association stated.

At the USPRE events held in conjunction with USPRE Week, up to 700 Wellington equestrians have turned out to attend a Spanish-themed party and enjoy riding demonstrations featuring top international riders and their PRE athletes. USPRE is currently the only breed association using show sponsorship in this way to reach our target audience.

USPRE is a Founding Sponsor of the Adequan Global Dressage Festival.

As a Founding Sponsor, USPRE has had the opportunity to have prominent name exposure as well as disseminate our message through a promotional advertising, award and event campaign that runs the entire 12 weeks of the circuit, directed at a demographic population most likely to consider the purchase of a PRE Horse for elite sport.