Independent Little Me Named KWPN Gelderland Horse of the Year 2020 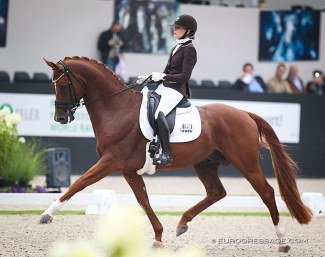 The 8-year old Independent Little Me has been proclaimed the KWPN Gelderland Horse of the Year 2020. He won the title by popular vote.

While there is no Gelderland blood at all in the stallion's pedigree the KWPN society remarkably decided to categorize him as such based on type.

He is bred by Marc Rothengatter and Renata van Steijn and he sold as a KWPN Dutch warmblood at the 2013 Borculo Foal Auction to Julie van Eeuwen. He is now owned by Julie's sons, Mark and Dirk-Jan van Eeuwen, after her untimely passing.

He was presented at the 2016 KWPN Stallion Licensing as a "normal" Dutch warmblood, but there the licensing committee decided to move him into the "Gelderlander" category and proclaimed champion of the licensing. The horse never did his stallion performance test so was not approved for breeding in the end.

"That was the KWPN's idea," breeder Renata van Steijn told Eurodressage about categorising her KWPN as a Gelderlander. "Maybe because of classical conformation. They told me that, but I was no longer the owner then."

"This is great news," said Van Steijn about Independent Little Me winning the HOY title. "Of course he has been special to us from day one. My former partner Marc and I sold Independent's dam Wendela to the U.K. in 2015 (editors note: to Mount St. John, but she sadly died of colic in 2017). There we flushed a few embryos from her."

Wendela, for instance, produced two ET foals, a young colt by Foundation and a filly by Negro, but there are more offspring in the U.K.