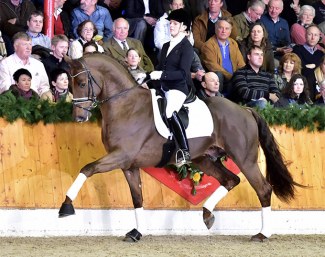 The 10-year old Oldenburg stallion Vilancio has been sold to David Burke of Pangea Farms in Canada.

Vilancio is by Vitalis out of Pavona (by Lancet x Rubinstein x Nimmerdor) and was bred in The Netherlands by the late Piet Crum.

Owned by Paul Schockemöhle, the liver chestnut was first licensed in Sweden in 2014, where he stood up for stud at the Flyinge State Stud with which Schockemöhle had a special collaboration going at the time.

Only in December 2014 he was approved at a special late licensing for Oldenburg breeding, in 2015 he was accepted by the Hanoverian society. Other German societies followed later on.

In 2015 he returned to Schockemöhle's stallion station  and placed on his roster in Germany, but in 2017 he was removed from it.  In 2018 the stallion did the 50-day performance test in Schlieckau to retain his licensed status and got 8.0 for dressage.

Vilancio only did one competition in October 2015 under Julia Watzek, showing in an A-level dressage horse test at the local show in Löningen-Böen-Bunnen.

Vilancio returned to Sweden in 2019 for a short season, but in 2020 he was leased to the Redefin State Stud for the year and was stationed at the reproduction centre in Rostock-Kritzmow.

So far, Vilancio sired 3 licensed sons in Germany: Vilanciano ( by Vilancio x San Amour), Veuve Cliquot HS (by Vilancio x Stedinger) and Verlaine (by Vilancio x Fidertanz). Four of his daughters are state premium mare. In Sweden 27 offspring are registered for sport bred during his time in Sweden.

The 10-year old Vilancio has now been sold to David Burke from Pangea Farms in Marmora, ON, Canada, where he will join Harvard and Dannebrog at stud.