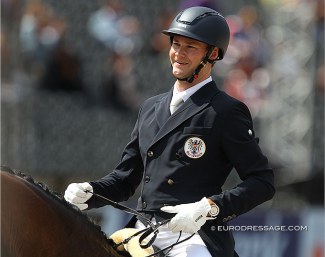 Austrian Grand Prix team rider Florian Bacher had to withdraw from participating at the 2021 CDI-W Salzburg last weekend due to a broken arm.

The accident already happened seven weeks ago and although Bacher is back in the saddle, his number one ride, the 12-year old Oldenburg gelding Fidertaum (by Fidertanz x Rubinstein x Pik Kaiser),  is behind on the training schedule.

"I broke my arm when a horse hit me with his head," Florian told Eurodressage. "The radius broke. I started riding again but was not able to train for seven weeks, so I didn't feel ready enough (for Salzburg)."

"I was supposed to compete," Florian added, "but got another cast." Florian will be freed from his second cast on 7 February.

Bacher is a former rider at the Spanish Riding School in Vienna. After 18 years working at the SRS, he resigned in 2018 to develop his independent training business. In 2019 he became the Austrian Grand Prix champion.

He is married to rider Verena Lehnhart and the couple has two children, their second they welcomed recently on 2 November 2020.