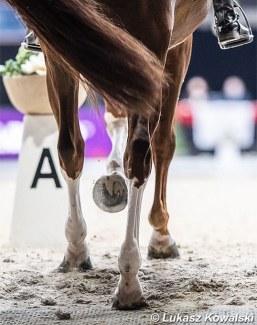 The FEI has reversed their recently revised participation rules for the 2021 World Cup Finals in Gothenburg in April.

It bases its decision on the protest that have been lodged against the decision as well as on the fact that now two Western European Leahie World Cup qualifiers have taken place.

On 17 December 2020 the FEI Dressage Committee posted that it will allocate three starting places, which were normally designated for a non-league rider, a home athlete, and one extra starting place (based on the FEI World Riders List), to riders of the Western European League.

The corona pandemic led to an unprecedented amount of cancellations of World Cup qualifiers and has made travel with horses more difficult.

The revised rules was decided on without consultation of the stakeholders clubs, and quietly posted on the FEI website mid December.

The updated rules will come into play when the CDI-W Vilhelmsborg would turn out to be the only Western European League qualification event, with  Salzburg and Den Bosch cancelled as well. The new rule read:

"If due to Covid-19 situation only one (1) WC Qualifying Event is held in the WEL in the current season the reserve temporary amendments plan will be used and only one result obtained in the qualifying events will count in the WEL Standings List."

In order to fulfil the Minimum qualification criteria for the WC Final in the 2020-2021 season In order to qualify for the Final or a League Final an athlete horse/combination must have started and completed at least two times in the Grand Prix Freestyle to Music in a CDI-W/CDI3/4/5*/CDIO with a score of at least 68% in the period starting from 01.01.19 and finishing at the date of definite entries for the WC Final .

An athlete may only participate with one horse in the Final. He/she may select the horse of his/her choice, with the restriction that the horse must have scored at least 68% two Grand Prix Freestyle to Music competitions in a CDIW/CDI3/4/5*/CDIO on two different occasions in the period starting from 01.01.19 and finishing at the date of definite entries for the WC Final

Voices in protest came from riders who did not appreciate that they were not consulted and which would have turned the the World Cup Finals into a European affair.

Today, the FEI notified the national federations that it has reverted to it old rules because two Western European League World Cup qualifiers have taken place:

The FEI Board has now approved to reinstate the allocation of slots as originally established in the Rules, which include slots for Non-league NFs (one slot) and FEI extra starting places (two slots).   For slots allocated based on the Dressage World Rankings (FEI extra starting places where applicable), Athletes will need to have competed in at least one (instead of two) CDI-W during the 2020-2021 season.