2021 USPRE WEEK Did Not Lose its Spanish Soul 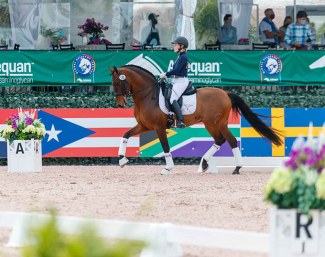 It’s not surprising that for the past years, P.R.E horses have stolen the show during the third week of the Adequan Global Dressage Festival in Wellington, Florida on 29 - 31 January 2021.  USPRE Week gathers international guests and the best riders and breeders of this fantastic Spanish horse on American soil.

Due to coronavirus (COVID-19) concerns, the traditional USPRE Week activities and events were cancelled. USPRE continued to sponsor the Grand Prix and Grand Prix Freestyle as usual during Week Three at the AGDF and used the opportunities as a sponsor to promote the P.R.E. horse in exhibitions and competition to the equestrian community.

AGDF did not lose its Spanish touch and soul. USPRE lovers and passionate equestrians were mesmerized once again by the Spanish horses’ neighing, the majesty of their silhouette, their robust, outstanding beauty and their flowing mane.

Two USPRE exhibitions highlights were held at the AGDF arena.  On Friday evening, Jacqueline MacDonald and Recargo PI warmed up the P.R.E engines. The beautiful sunset became a backdrop for the charm and charisma of Recargo PI.  Under the sound of Spanish melodies, the pair entertained the dressage VIP audience with an entire choreography including flying changes every two strides, piaffe, passage pirouettes among other exercises.

On Sunday afternoon the sparkle of the P.R.E. horse was showcased by Maria Lithander, head trainer of Hampton Green Farm, on Campanero HGF, an 8-year-old P.R.E horse bred on American soil. Campanero HGF became the light for the P.R.E enthusiasts, showing his impressive paces and beauty to the beat of the beautiful lyrics of “Kiss from a Rose” by Seal.

USPRE Commitment towards the AGDF

USPRE continues to sponsor the Grand Prix and Grand Prix Freestyle as usual.

“We usually have a big week with the U.S. P.R.E. horses here. We showcase a lot of horses and display their ability and talent, but unfortunately due to the pandemic, USPRE could not celebrate as usual. However, we were happy to be able to still show a few of the horses and were happy to see some of them competing here this week. We are thrilled to sponsor AGDF again this year, and we look forward to continuing with that and hopefully we can display the U.S. P.R.E. in years to come.”

In the national arena, a total of 13 riders competed with their P.R.E horses, which is a large number.

The USPRE High Point Series is designed to encourage PRE riders of all levels to train and compete in rated dressage shows.

USPRE week will come back next year stronger than ever. USPRE thanks all its members for their unconditional support specially during these unprecedented times.

USPRE week is captivating, glamorous and above all is dedicated to the horse that inspires us the most: the PURA RAZA ESPAÑOLA.