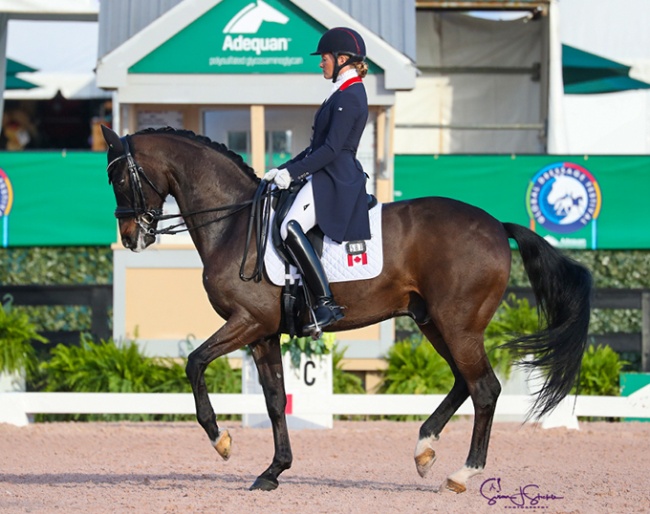 Kellock and the 2006 Rheinlander gelding by Sandro Hit, owned by Enterprise Farm Equestrian LLC and Lindsay Kellock, received a 73.319% from the judges, concluding a momentous weekend for the duo.

“I had more confidence going in today based on his performance in the Grand Prix on Thursday,” Kellock began. “He went in and really tried his heart out and gave me a good feeling, which then gave me confidence to ride him a bit more in the ring today. Normally I’m like, ‘Oh, can I do this? Maybe I can push this button?’ but today he just felt so great. I was able to really ride him, take a deep breath, and I think that showed a lot more with those higher scores.”

Though the pair didn’t enter an international competition arena for almost 10 months, they spent their time at home perfecting the basics and working on their overall performance together.

“[2020 was] a very unfortunate year in many ways,” Kellock explained, “but it was a positive for my horse because he was still green last year. I was really able to work through the training [last] summer and then getting back to work with Ashley [Holzer] in November, ramping up the training then, and having the time to work on weaknesses from last year has been huge for us. We’ve worked really hard at that all summer.”

The pair posted a personal best score in the Grand Prix on Thursday with a 72.326% and came back today to earn yet another. “I can’t describe the feeling; it’s amazing,” Kellock admitted. “I couldn’t be happier, and I’m speechless. The horse is an incredible horse, and I’m glad that I’m finally able to bring that out in him.”

With Tokyo being their main goal for the year, Kellock will play the rest of the season by ear and focus on what’s best for her mount. “I’m going to go show-to-show with him,” she concluded. “The big plan is to qualify for the Olympics, so I’m going to see how he’s feeling. I think I’d like to do the five star and then after that we’ll see.”

Second place in the Grand Prix Special went to the USA’s Jennifer Williams on Millione, a 2003 Danish Warmblood gelding by Milan owned by Millione Partners LLC, with 71.979%. Great Britain’s Susan Pape rounded out the top three with Harmony’s Eclectisch, Susan Pape and Harmony Sporthorse’s 2009 KWPN stallion by Zenon, earning a 71.489%.

Earlier in the day, Luuk Mourtis (NED) and Harmony Sporthorses’ 2009 Hanoverian gelding by Don Primus, Don’t Stop The Feeling, topped the Intermediare I 1* with a 72.235%. Second place was awarded to Jodie Kelly-Baxley (USA) and her own Grayton Beach, a 2001 KWPN gelding by Negro, with a 71.206%. Third place went to Jennifer Wetterau (USA) and her own Hartog, a 2012 KWPN gelding by Apache, earning a 70.971%.

In the Intermediare A Mikala Münter (USA) took home the victory with Skyfall, her own 2008 Oldenburg gelding by Zardin Firfod, with 67.235%.