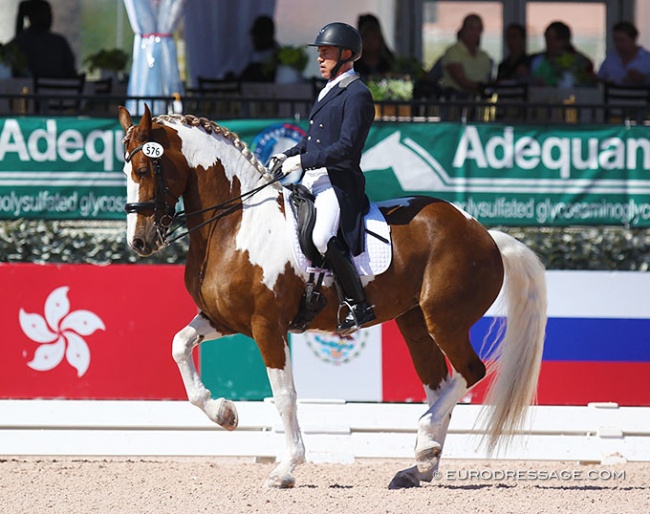 Adiah HP is a 14-year old Friesian mare by Nico out of Marije Ant (by Anton). He is bred and owned by Sherry Koella.

Her pie bald coat comes from Samber in the third generation on the sire line.

Under American professional Jim Koford the mare rose to stardom in the U.S.A. with her coloration and Friesian Grand Prix moves.

Koford received the ride on Adiah six years ago and won bronze at the 2017 U.S. Developing Grand Prix Horse Championship.

They made their international show debut at Grand Prix level in Wellington in March 2018 and also competed in Tryon and Devon that year.

In 2019 the pair moved the crowds at the Global Dressage Festival in Wellington and went on a similar CDI route with the same stop-overs in Tryon and Devon, where they scored their international Grand Prix best score of 69.065%

The combination's last season together was the Wellington winter season of 2020. Their last show in March 2020.

Adiah HP has now moved on to a new rider while Koford recovers from back surgery.

Koford underwent three operations due to a hernia in 2020 and while he was recovering, a 12-year old has been keeping the mare in shape with light work.

"The third surgery in November hit me the hardest,” Koford told The Chronicle of the Horse. “I was so off my game, and I was not allowed to ride. One of the girls at the barn was having difficulty with her horse, so I put her up on Adiah so she could have a fun ride. I watched in amazement as Adiah sparkled. Her eyes were bright, and her ears were up, and she was so earnestly just dancing. [The girl is] 12, and I thought, ‘Oh, maybe she’ll do some leg-yields or some shoulder-in,’ but by the end [Adiah’s] going around doing world-class piaffe and passage with this 12-year-old who hasn’t done anything like that in her entire life. I thought, ‘What an amazing, amazing thing.’ I loved her even more at that point—just how genuine she is."

Koford and Koella have now sold Adiah to Ashley Maul, who was looking for a Grand Prix schoolmaster.

The 38-year old Maul from Delaware, Ohio, has been competing at small tour level with 15-year-old Westfalian gelding Fiaro Lacendos (by Furst Piccolo x Rapallo). She trains with Jennifer Roth.