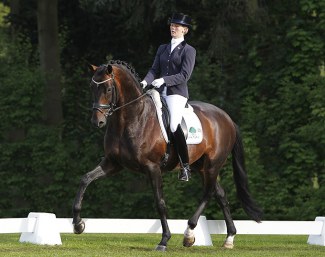 The KWPN society has approved the 17-year old Westfalian stallion Spielberg for Dutch warmblood breeding based on the competition results of his offspring.

Spielberg is a 2004 born Westfalian by Sunny-Boy out of Rosiera (by Rosier x Roncalli xx). He is bred by Matthias Böckermann and owned by Hendrik Nijhof in partnership with the Schwaiganger state stud.

Spielberg was first licensed at the 2006 Westfalian stallion licensing and approved for Oldenburg two months later. He was not KWPN approved, but in his first year at stud breeders loved him and he was bred to no less than 500 mares, both in Germany and Holland.

He did his 30-day stallion performance test in Zweibrucken and scored 7.99 for dressage and 7.41 for show jumping, finishing on 7.96 points.

He was only very lightly competed in his life. First in June 2008 by Dutch Marcel Sterrenburg and a year later by Joyce Lenaerts in the Bundeschampionate qualifier in Munster-Handorf in July 2009. That was the stallion's last show in Germany, but he continued to compete a bit in Holland. An injury kept him from developing a bigger career in sport.

In Germany he has sired 1 licensed son (San Felice) and 5 state premium daughters. 136 of his German offspring is registered for sport and 16 of those are competing at S-level in dressage. In Holland there is 1 licensed son: King van het Haarbosch.

"The already 17-year old Spielberg earned his (KWPN) approval for his successful offspring in sport, his genes (absent of the usual KWPN lines) and his achievements in sport," the KWPN stated. "Spielberg is interesting for breeding for his blood, and looking at his offspring he passes on a good walk and rideability."

Spielberg has the PROK predicate and fulfils the X-ray requirements of the KWPN studbook. He is WFFS negative.