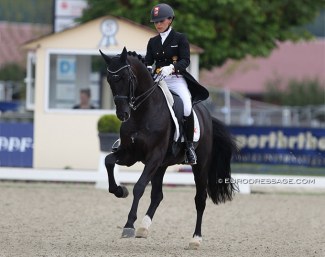 German young rider Elisabeth von Wulffen has added another horse to her ever expanding string of horses, the 8-year old Oldenburg bred Damiro.

Damiro is a 2013 born gelding by De Niro out of Bundeschampion mare Samira (by Sandro Hit x Rockwell x Landino). He is bred by Ullrich Kasselmann.

The bay sold as a stallion for 350,000 euro at the 2017 PSI Auction to the Taiwanese investors' group, Star Horses.

The horse began his sport career fairly late in life as a 6-year old. He first competed in Ankum in two M-level tests with Czech Eva Niklova.

As of 2020 the ride was allocated to Charlott-Maria Schurmann, who joined the Hof Kasselmann riders' team as a freelancer. She made a winning debut at the 2020 CDN Ankum in January last year, also at M-level, but quickly moved up the horse to developing Prix St Georges horse level.

The pair campaigned in the Nurnberger Burgpokal qualifier in Herbergen and made its international show debut in the 7-year old tests at the CDI Hagen in July.

Damiro has now been sold to Elisabeth von Wulffen. Originally from Munich, Germany, the young rider moved in 2020 to Daniel Ramseier's yard Sportpferde Im Brook with her coach Bianca Nowag.

In 2020 the Von Wulffen family bought Fiesta Bonita (by For Compliment x Rubinstein) as well as Florine OLD (by Foundation x Lauries Crusador xx) for Elisabeth. The 19-year old  finished 11th at the 2020 German Young Riders Championships on Dancing World (by Dancier x Wolkenstein II) last September. She also competes Babylon (by Belissimo x Florestan). She is preparing for her transition to Under 25 level.