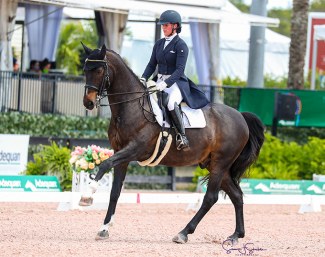 The 10th week of the 2021 Global Dressage Festival (GDF) commenced on Wednesday 17 March 2021 featuring the Nations Cup for Under 25 Grand Prix riders, presented by Diamante Farms, and welcoming the first win for a Canadian U25 Team in five years.

The Under 25 Nations Cup featured seven riders in total: teams of three from Canada and the United States and one Spanish individual rider.

First in the ring for Team Canada was Beatrice Boucher, who rode Camille and Gilles Bergeron’s 2006 KWPN gelding Baldacci (by Havidoff) to a score of 65.323%.

She began, “I just went in and tried my best to get through the test. It’s the first CDI that I’ve done with this horse, and I’ve only ridden him in two shows to qualify for this show, so I don’t know him very well in the show ring.”

It is the 23-year-old’s first season competing in the U25 division, and she noted that she wants to spend a bit more time perfecting her performance before heading the Grand Prix in a year or two. Of her first Nations Cup experience, Boucher said, “It’s really special to be on a team with these two riders, so it feels very exciting. They’re great teammates, and the whole experience has been fun.”

Creech-Terauds commented that in contrast to Boucher, she and Fleur De Lis L have a longstanding relationship.

“I started with Fleur five years ago, and we went from the Junior division to the young rider division, and now the U25,” she said. “This is our first year doing the CDIO-U25 together, so it’s been a really amazing journey because we know each other so well. It’s really fun going out there into the ring with her.”

The mare is a homebred mount from Leatherdale Farms, and Creech-Terauds noted how special it is to see how far she has come. “With Fleur,” she explained, “my goal is to just continue in the U25, and if we can do some Grand Prix classes together, we have a lot of time together. We have a lot of potential, so I’m very excited for the future with her.”

Camille Carier Bergeron was the last to go in the class and sealed the deal as the anchor rider with a 69.412% on Acoeur, Gilles Bergeron’s 2007 Württemberg gelding by Acordelli. After two riders each for the teams from Canada and United States, it came down to Carier Bergeron and Acoeur to put in a strong score to garner the gold medal. They did just that, bringing Canada’s team total to 135.941%.

“Before we went into the arena,” stated Carier Bergeron, “I knew around where I needed to be scoring, but I was more focused on Beatrice and Vanessa, and where their scores were. Once I got on my horse I didn’t think about it. I was just trying to do my best and go for it.”

The 20-year-old just came off of a successful week at GDF8 where she was overall champion of the 2021 Florida International Youth Dressage Championships, placing first with Acoeur in the CDIU25 16-25 Division.

“I’ve had Acoeur for three years now,” said Carier Bergeron. “This year has been a really good year for us, and I feel like we’ve gained a lot of experience in the CDI ring. We’re more confident when we go in the ring now, and he’s so steady. He’s just a horse that wants to give his all, and he’s very steady, very calm.”

She concluded, “My goal is to continue to get better in the U25, and then maybe compete in some Grand Prix classes. I’d like to take Acoeur to the Grand Prix this year, and that will be our first ever, so that’s our goal. We go day-by-day and aim for that.”

The United States of America took home second place in the CDIO-U25  with an overall team score of 135.295%.

The senior team CDIO contest is at the half-way mark, with four teams — the USA, Canada, Germany, and Australia— fighting for the spot atop the podium.

Team Germany, consisting of Michael Klimke, Kevin Kohmann, Christoph Koschel, and Frederic Wandres, is in the lead with a score of 223.333.

The United States of America team of Katherine Bateson-Chandler, Benjamin Ebeling, Adrienne Lyle, and Jennifer Williams sits just behind in second with 222.370.