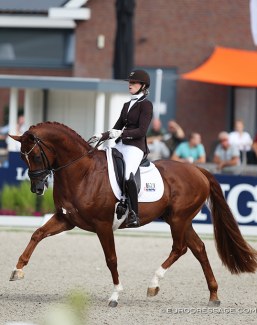 Since 1960 the KWPN society has taken charge of the breeding management of the versatile Gelderlander Horse, whose history is steeped in agriculture. Increasingly Gelderlander bloodlines are being infused with "foreign" blood, because according to the KWPN, breeding a Gelderlander is no longer line-breeding, but type-breeding.

A group of purebred Gelder aficionados have reacted against it and received recognition from the Dutch government in 2019. They founded their own, small Classic Gelderlander Horse Studbook.

The Gelderland horse was a popular riding horse from the sixteenth century. When the "Geldersch Paarden Stamboek" was founded in 1890, the breeders focused on two different types: an agricultural carriage horse and a luxury carriage horse.

With the emergence of the car as of 1920 and the tractor from 1950 onwards, the Gelderlander as a carriage horse and agricultural horse gradually became obsolete. As of 1960 the KWPN society (Royal Warmblood Horse Studbook) took over the breeding management of the Gelderlander horse and focused on breeding versatile and reliable horses for both riders and drivers.

Today's Gelderlander is a continuation of the original starting population. A small group of ardent enthusiasts honours this classic type. The harness horse breeding direction includes a larger group of enthusiasts. At the time, the agricultural horses with the best gaits for the carriage were more or less selected. These horses were later placed in a separate register. The show harness horses originate from this.

Jumping and dressage horses are the largest breeding directions. The breeding goal is aimed at a performance horse with a healthy constitution and a correct movement mechanism and foundation, whereby the exterior should preferably be attractive.

Inspector Wim Versteeg and Jan Vonk, a former Breeder of the Year, sat together to talk about the "Gelders Paard" during the KWPN Stallion Licensing in February 2021. In this breeding direction, a lot of work is being done on the Gelders Paard 2030 plan.

“Dressage or show jumping horse breeding is really about breeding a horse for the highest level,” says Wim Versteeg. “With the Gelderlander horses, the emphasis is on completely different things. There we are looking for a versatile horse with the character to ride, jump or drive; a horse to ride in the forest and that is suitable for the whole family. That requires a different approach.

Gelderland breeding is a type breeding. "Traditionally, the Gelders horse is a somewhat heavier horse with a somewhat classic silhouette. A horse with a lot of front and a very good character. Because the use is so versatile, you will see some differences in terms of movement. A driving horse moves differently than a dressage or a jumping horse. So there is some flexibility in that."

Jan Vonk confirms that: “When you see a Gelders Horse, something has to strike you: Lots of front expression, a nice eye and with stable, wide loins that can generate a powerful upward movement. Very important is the interior, the character. Not a pushover, but a horse that thinks along with you and is friendly to everyone. With the Gelderlander horses we really have to think about blood distribution. As a breeder you should, therefore, not be afraid to occasionally take a trip to a different breeding direction or perhaps even a different studbook."

The KWPN is working hard on the "Gelders Paard 2030 Plan".

Wim Versteeg explains: “We discussed together what the ideal type of Gelderlander is for us. Now it is important to write down this ideal image in the correct words how we see it. Part of the exterior and the movement sequence has been discussed with the supporters. The corona pandemic has delayed the process a bit, but we will talk about this again at the next board meeting. Once the plan has been fully written down, it will again be presented to the members before it is presented to the Board of Directors and Members' Council. It is very important that this plan is supported by all Gelderlander horse enthusiasts and breeders."

In 2005 a group of committed breeders of the original/authentic Gelderlander horse founded their own association "Gelderlander Paard Associatie" (GPA) in a reaction against KWPN's breeding direction for the Gelder Horse.

The KWPN used to uphold a policy of line breeding, stipulating that a horse needed to have at least 75% of authentic Gelderlander blood to be considered the breed. However KWPN let go of this rule and even replaced the "Gelderlander type" label with a "sport horse basic type" label.

GPA is highly concerned that the basic qualities of the Gelderland horse will get lost: a horse with an outstanding character for recreation sport. They believe KWPN is too committed to top sport horse breeding.

GPA was founded "to save the bloodlines and internal qualities of the Gelderlander horse," said Anton van Lijssel, "and to prevent that that good name of the breed is damaged by horses with very different blood who are sold under that name."

After a decade long battle battle, GPA won its fight with the Dutch government to have an officially recognized studbook to preserve the authentic Gelderlander.

RVO recognized the studbook as part of the Dutch government's policy to maintain biodiversity and Dutch cultural heritage.

However, the supreme court in The Netherlands ruled that KPST cannot use the original name "Gelders Horse," because this name has been granted to the KWPN studbook. Therefore, KPST will used the name "Gelderlander" with the prefix "Klassiek".

KWPN is now the mother studbook for Gelder horses, which "look" like a Gelder horse, but have no Gelder blood. For the KPST studbook the purity in the bloodline is essential.

KPST registers its Gelderlander horses with the KGPS (Klassiek Gelderlander Paarden stamboek). Interestingly, they have also created a studbook branch called "register book" for stallions who do not have at least 50% of classic Gelderlander blood, but "who can contribute to the breeding goal of KGPS through their pedigree and exterior." KGPS uses as motto for its breeding: "healthy, steady, allround."

The importance of Gelderlander blood to KWPN horse breeding is undeniable. Great sires of the past all had 75% Gelderland blood in their veins. Just think of sires such as Aktion (Gyula Dallos), Wolfgang (highly popular dam sire for dressage), and Nimmerdor (most successful KWPN show jumping producer),