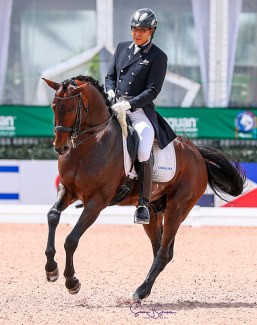 The 2021  Global Dressage Festival (GDF) resumed competition in its 12th and final week of competition in Wellington, FL, on Wednesday, March 31. Victory in the Prix St. Georges 3* went to Dong-Seon Kim (KOR) and his own Lord Nunes.

Kim and the 2012 Rhinelander stallion Lord Nunes (by Lord Loxley I) have found their stride after two months of competition and collected their fifth trophy in the small tour. Yesterday he rode to a score of 67.441% to clinch the blue ribbon in the first class of the final week.

“Today I really focused on preparing all of my corners,” explained Kim, “and riding a slower tempo because it’s been a little quick, so I wanted to develop more cadence. All of those things went very well, but I also made some silly mistakes on my part. When those small details come together I think it will be a really solid test.”

Kim has been very successful at the Small Tour levels with the stallion, which he has brought up the levels after partnering with it as a five-year-old. He said, “I brought four horses here, two from Korea and two from Europe, and I was especially happy because I’ve had Lord Nunes since he was five and I developed him a lot by myself. It’s really meaningful that a horse can come from Korea all the way here to the USA and still perform well and be as successful as he’s been.”

The 31-year-old is hoping to represent his country at the postponed Tokyo Olympics this year, but also noted that it’s the process of the sport that matters the most to him. “I do hope for Tokyo,” he continued. “There is one other contender who is also vying for a spot, but hopefully I get a shot to go. Even if that doesn’t happen, it’s still been a great season, and Tokyo isn’t my end goal – that is to do well within the sport.I really enjoy the process in itself.”

Kim concluded, “Overall, it’s been a good season. I would especially like to thank the six members of my family, and my lovely girlfriend Soo Hyun Hwang who is waiting for me at home in Korea. They are always supporting me, and I am very grateful for that.”

Second place went to Elaine Cordia Van Reesema (USA) on her own 2010 KWPN gelding, Fellow by Amazing Star), earning a score of 65.912% to kick off their competition week.