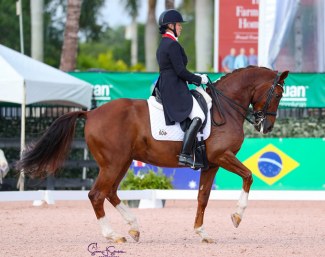 Week ten of the 2021 Global Dressage Festival (AGDF) was FEI Nations Cup week and concluded on Sunday 21 March 2021 with top honours for Karen Pavicic (CRO) and Totem after earning a 69.206% in the Intermediaire II 3*

Pavicic has had the 2012 Hanoverian gelding by Totilas, that she co-owns with her husband Thomas Baur, since he was a foal.

“He’s nine years old now,” she began, “so it’s been a nine-year journey with him to this point. He’s had a lot of success here at Global, starting in the FEI four-year-old on the national side of competition and then went up through the FEI five-, six-, and seven-year old classes here, and last year we did the small tour. We moved up to the medium tour this season, so he’s been very promising so far.”

Though her plans are still tentative based on the gelding’s progression, Pavicic noted: “I’m hoping to ride a national grand prix with him by the end of our competition season, and possibly do a CDI if we can, but it will really depend on him and how he’s doing. He still needs a little more confidence, particularly in his changes, but as soon as he’s ready I’d love to jump into that.”

Once the GDF schedule comes to a close, the Canadian born Pavicic will head back to Vancouver, BC, and hopes to get to a few more shows before 2022 arrives.

“There aren’t many shows in Canada this year, but I’m hoping to take in some CDIs there when he’s ready,” she concluded. “There are a few CDIs in California that I’d like to get to in October and November, and then we’ll head back to Florida.”

Second place in the Intermediaire II went to Pia Fortmuller (CAN) on Frieda, Lars Busch and Pia Fortmueller’s 2011 Hanoverian mare by Furstenball OLD, with 68.824%. Third was rounded out by Nicole Levy (USA) on Imposant MC, her own 2013 KWPN gelding by Bretton Woods, riding to a 61.735%.

The Intermediaire Freestyle 3* recorded another win for Dong Seon Kim (KOR) and his own Lord Nunes, a 2012 Rhinelander stallion by Lord Loxley I. The pair received a 73.050% for their efforts.

This was the combination's third win of the week as the sole pair competing in the 3* small tour. Aboard his Grand Prix horse DSK Belstaff, Kim won yesterday's Grand Prix Kur 3*