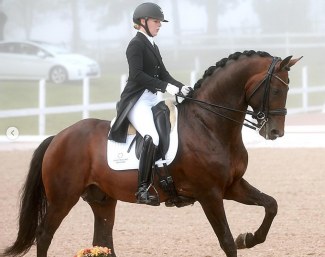 Fiona Bigwood has returned to the arena with a new Grand Prix horse, Fame.

At a regional show at Hunters in the .U.K., one of the first competitions since British corona measures were relaxed, Bigwood steered Fame to victory with 73% on the pair's Grand Prix debut.

"It was so nice to be going down that centre line again," said Bigwood.

Fame is an 11-year old Dutch warmblood by Bordeaux out of Bonaventura (by Rhodium x Havidoff). He is bred by M. Gerritsen.

He was presented in the second phase of the 2013 KWPN Stallion Licensing but not accepted. He sold to Joop van Uytert.

Fame was first trained and competed by Belgian Larissa Pauluis, who finished 11th at the 2014 VSN Trophy Finals and then went on to win bronze at the 2014 Belgian Young Horse Championships.

In 2015 Larissa and Fame were the first reserves for the Belgian Team for the World Championships for Young Dressage Horses.

In 2016 Pauluis and her business partner Van Uytert sold Fame to Jenny Linden Urnes of Christinelund Dressage in Sweden.

Fame made his international show debut at small tour level at the CDI Herning in October 2018. Under Swedish Sofie Lexner, he scored 70.00% in the Prix St Georges and 66.941% in the Inter I.

While two of Fiona's internationally competed Grand Prix horses are in The Netherlands to be sold (Kjaerholm's Abutsiaq, Pin Rock's Foxfire Blitz), the experienced British team rider has been focusing on her other GP ride, Daytona Platinum (by Dante Weltino x Charon).

In 2020 corona year, she competed the now 10-year old Daytona Platinum at the CDI Keysoe in Great Britain as well as showing him and the 8-year old home bred small tour horse Casper xx (by Cashmir x Libero H) at several national events.

With Fame, Fiona has now kicked off the 2021 show season with a win.