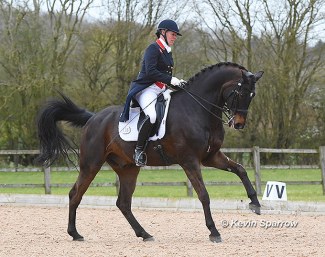 Hawtins' Delicato is a 13-year old British bred Hanoverian gelding by Diamond Hit out of Ravenna Elite (by Regazzoni). He is bred by Judith Davis and listed with the FEI as owned by Carl Hester, Ann Cory, Ben Neal and Lady Anne Evans.

Under Charlotte Dujardin the bay gelding made his international show debut at the 2017 CDI Hartpury, after winning the National Prix St Georges title in 2016. The pair also competed at Hickstead that year, overall raking in five victories out of six starts.

Hester last competed Delicato at the 2019 CDI-W London, where they were second in the Kur to Music.

Delicato has been quietly offered for sale since 2019 and rumours were already running rife that he sold in the summer/autumn of 2020. However at the time Hester told Eurodressage they were "just rumours."

Today Fiona Bigwood made her public coming out with Hawtins Delicato at the affiliated show at Hunters Equestrian in Cirencester on 7 April 2021. In cold and windy conditions, the pair scored 69.90% for a second place in a field of eight.

Bigwood also has Grand Prix horse Daytona Platinum to ride, alongside rising star Fame. Last week, she and her pocket rocket Fame had their winning 73% Grand Prix debut, but today the pair retired in the Grand Prix.

According to the FEI database, the owners of Hawtins Delicato have not changed since 2019.

Fiona can be an Olympic contender with Hawtins Delicato as the FEI rule says that "horses entered for the Equestrian Events at the Olympic Games must have been registered with FEI as property of owners of the same nationality as the Athlete, by 15 January 2021."

Bigwood and her husband, Danish team rider Anders Dahl, live at Brantridge Park in Balcombe, West Sussex. She has been training with Carl Hester for year.

"I am thrilled Delicato stayed in the UK," Carl Hester told Eurodressage. "I help Fiona and Del has the lifestyle he has always had."

(In an interview with Horse & Hound a day after this article was published, Carl said that he offered the ride on Del to Fiona in March 2020. After a successful try out period she bought the horse.)