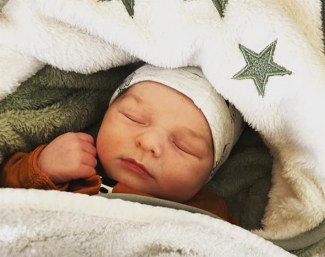 Dutch Grand Prix rider Joyce Heuitink-van Rooijen has given birth to her first child, a baby boy, on 5 April 2021. Joyce and her husband Simon van Rooijen named their son Bryan Benjamin van Rooijen. Heuitink is an international GP rider, Dutch national GP judge and Dutch national para team trainer. The couple got married on 12 September. Joyce's top horse, Gaudi Vita, has been stabled with Edward Gal as the mother-to-be prepared for the delivery.

After only a very short period being based at Gut Haus Giesking in Appelhulsen, Germany, Valerie von Hohenzollern-Brenske relocated back to her homestead in Munich. Von Hohenzollern rented Haus Giesking one year ago to set up her dressage base and partnered with Marcus Hermes. The plans were short-lived, and the family moved back to Munich.

Steffen Bothendorf, the managing director of the Graditz state stud, passed away on 30 March 2021 after a long illness. He was 66 years old.  Bothendorf began working in Graditz as an assistant in the breeding department in 1980. In 1982 he was appointed breeding director and in 1984 managing director of the state stud. He retired from the position in 2018 for health reasons. Bothendorf was known for his expertise in Thoroughbreds and led a successful breeding programme in Graditz using TB and Trakehner blood. Under his supervision, licensed stallions such as Feiherr von Stein (by Millennium x Perechlest x Maizauber) and Sir Graditz (by Sezuan x Sir Donnerhall x Lanciano) were bred at the state stud.

The Graditz state stud was known for its Thoroughbred breeding and the stud imported the legendary Irish TB, Dark Ronald, for instance. Read all about the stud's history here.

American Grand Prix rider Lauren Sprieser invested in a new 4-year old horse. She purchased Madiene (by Toto Jr x Don Primaire x Akteur) from horse dealer Rom Vermunt. "Hey, remember the time that, after a cocktail or two, you saw a really cool horse for sale on Instagram, and decided to buy it?⁣ No? Oh wait, that’s me," Sprieser joked.  "What could go wrong? ⁣ Meet Madiene, who flies to the US tomorrow, and then spends an honest to god eternity in CEM quarantine. So far, all I know about her is that she’s got a beautiful way of going and really, really likes dogs. Like a lot."

Horses.nl reported that Dutch Young Rider Esmee van Veen lost her small tour horse Gordias Fortuna (by Sorento x Rubiquil) to colic. The horse had been struggling with colic attacks the past two years and was twice operated on. Unfortunately the third bout of colic proved to be fatal. Van Veen, who competed once internationally at the 2019 CDI Le Mans on Featherlight DE, was preparing Gordias Fortuna for the big tour.