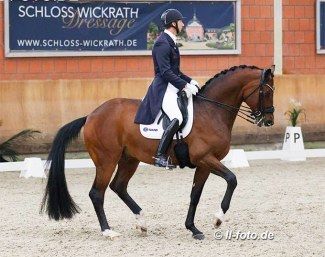 With only a very limited number of CDI competitions surviving on the FEI spring calendar of 2021, international dressage riders are looking to compete and put mileage on their horses at national competitions.

Here is a quick review of what happened last weekend

The most interesting national competition of the weekend took place at Schloss Wickrath near Mönchengladbach on 10 - 11 April, where Grand Prix level tests were ridden.

Swedish Olympian Patrik Kittel brought his new horses and a handful of students to Wickrath. He won the S*** Intermediaire II test on Saturday aboard Touchdown (by Quaterback x Sack) with no less than 79.386% The three  judges were divided on their scores for the ride, with Böckler on the "low" side with 76.974% and Bodo Maiwurm shooting up to an 82.895%, but they unanimously had him first. video here.

Touchdown is bred by the Skeppstrand family and in 2017 Philip Ruwe showed the bay gelding at the World Young Horse Championships under the guidance of trainer Christoph Koschel. At the end of 2017 Koschel took over the ride and he competed the horse three times in 2019. In April 2020 Kittel purchased an ownership share from the Skeppstrands. The bay was once competed in May by assistant rider Malin Nilsson-Wahlkamp, before Kittel took over. Touchdown sold to Swedish Anna Forslund in the summer of 2020 and sponsors the ride for Patrik.

A day later Kittel placed first and second on two new additions to his barn. He won aboard his own and Arlette Jasper Kohl's 9-year old Westfalian mare Forever Young HRH (by Furst Fugger x Don Bosco) with 78.023% and was second on Andreas Helgstrand's 11-year old Westfalian Bonamour (by Bonifatius x Rousseau) with 76.550%. The chestnut Bonamour was previously owned by Korean Dong-Seon Kim, who had Hubertus Schmidt develop the horse to FEI level. In 2019 Kim sold Bonamour to Helgstrand. The Dane has now sent the horse to Kittel to be competed and sold.

Swedish former Under 25 rider Beata Söderberg is now training with Kittel and scored 70.263% aboard the former international Grand Prix horse Heuberger TSF (by Imperio x Michelangelo). Previously campaigned by Anabel Balkenhol, Heuberger was sent to Helgstrand to be sold, where Soderberg acquired him, while also swapped World Young Horse champion Fiontini. A day later on Sunday, the pair posted 70.039% to place 7th.

Former Swedish junior-young rider team member Jennifer Lindvall has moved to Kittel to work and train in Germany. Her last international start was in May 2019 with Bobcat (by Breitling x Silvano), but in Wickrath the rising 23-year old showed the 17-year old Danish warmblood Midt-West Casino (by De Niro x Rubinstein) in the S*** and placed 12th with 69.035%. On Sunday they posted 66.434% to place 11th.

German Young rider team member Luca Collin made her show debut on the 10-year old Budhi (by Bordeaux x Likoto xx) but retired from the test. With her 4-year old Oldenburg mare Verona Diamond (by Vivaldi x Don Diamond) she won the A-level test with a whopping 9.0.

Australian William Matthew rode the former licensed stallion and now gelding Freischütz (by Foundation x Del Martino) to a 14th place with 68.651%. The dark bay was previously owned by Grand Ducal Dressage in Luxembourg and Helgstrand Dressage in Denmark.

At the two-day indoor competition at Gut Winkelacker in Ingolstadt, the Grand Prix class on Sunday was won by Uwe Schwanz on Hildegard Riedmaier's Danish warmblood Rockson (by Rockefeller x Sorento). The duo scored 72.933% for the victory and edged out Ferdinand Csaki on his own Hanoverian Stevie Wonder M (by Stedinger x White Star). Previously owned by Sara Marburg, Stevie Wonder M scored 72.733% for second place.

Former German B-squad rider Lisa Müller chose Ingolstadt as her debut show aboard the 12-year old Hanoverian gelding Quantum Vis MW (by Quaterback x Gloster), which she only acquired a few weeks ago. The pair placed 13th with 65.300%. While the test certainly had some nice and promising moments, the brand new partnership had a few major bobbles with refusals in the first piaffe and one tempi changes. The judges were puzzled about the ride: two had them at 62.4% and 62.6%, the third judge saw a 70.9% in it.

The Prix St Georges was won by the Bavarian ride Alina Kalstein aboard the Austrian warmblood United Europ (by Uphill x Almox Printjs J) with 72.763%. The stallion, who started his career in Austria, is now owned by Magdalena Nagl.

Lena Waldmann made her long-awaited come back on the Oldenburg licensing champion Morricone (by Millennium x Rubin Royal). Gestut Bonhomme's black stallion last competed in the 2019 Nurnberger Burgpokal a year and a half ago.

Waldmann and Morricone made their debut in the Intermediaire II and won with 73.895%. Aboard Bonhomme's Cadeau Noir (by Christ) she was second with 71.974%.

The S* test was won by Juliane Brunkhorst on new ride, Peter Brenske's Oldenburg gelding Diamond of Bippen (by Don Frederic x Al Martino). She was also listed to ride Belle de Carpie in the Inter 2, but the mare was not on the results list.

Three months ago, Brunkhorst also took over the ride on the 10-year old Holsteiner Aperol (by Ampere x Aljano) and last week she first competed him at S*** level to a 73,47% score. Aperol was owned by Heidi Blohm and competed by Emma Kanerva to a 10th place in the consolation finals for 7-year olds at the 2018 World Young Horse Championships in Ermelo. In 2020 Kristina Böckmann was showing the bright bay.

Australian Olympian Kristy Oatley placed third in the S* test aboard the 9-year old Oldenburg bred Rosenlorbeer (by Romanov x Welt Hit II). The horse was last competed in 2016 by Stephanie Kemper at L-level before selling to Rosalind Oatley.

The Danish bred and Hanoverian registered stallion is Warendorf's pride and glory and his small tour debut was a winning one with an 8.5 score.