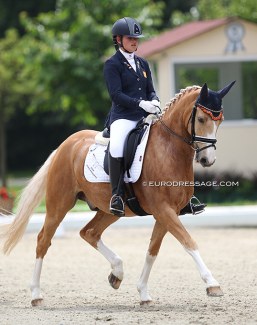 First Hummer is a 2012 born, Dutch Welsh pony by FS Mr Mobility out of Romy (by Jarno). He is bred by P. Binksma.

As a 2.5 year old the pony sold to Michelle de Jonge and her mother CMG Roggen.

In 2018 First Hummer made the transition to FEI pony level at 6 years of age and they had their CDI debut in Nieuw en St.Joosland, where things didn't go as well as planned. A week later they competed at the CDI Sint-Truiden and posted scored of 63 and 67%. They also showed in Uggerhalne, Hagen, Diepenbeek and Exloo that year.

In 2019 the owners gave the ride to Jill Bogers, who rode her first international with him at the CDI Sint-Truiden. They missed out on a team spot for the 2019 European Pony Championships.

In 2020 their scores kept climbing and won silver at the 2020 Dutch Indoor Pony Championships. They were selected on the Dutch team for the 2020 European Pony Championships in Budapest, where the pair won team bronze and placed 8th in the Kur to Music Finals. It was Bogers' last year on ponies.

Six weeks ago, Isabella was partnered with First Hummer and the pair initially trained with Jill Bogers to get to know each other.

"I had such an amazing, cosy time with them," said Isabella about her time riding at stallion station Joop van Uytert, where Bogers is based with her new ride Lennox US. "Every day is such a joy with this pony, who always wants to do his best for you.

The combination has now moved into training with Coby and Marlies van Baalen.