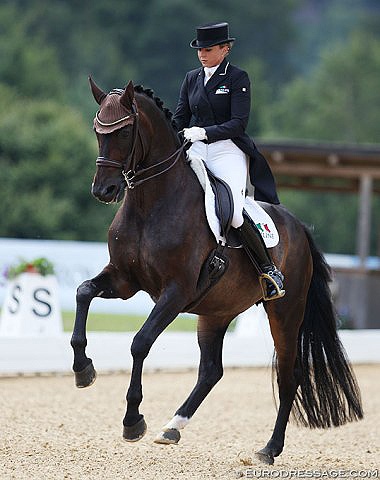 The pair placed third in the national Grand Prix in Pforzheim with a score of 71.733%. The class was won by Jasmin Schaudt on Fano (by Fiorano x Friedensfurst) with 72.667%, while Matthias Bouten placed second on Meggle' Boston (by Johnson x Partout) with 72.567%.

In the lap of honour, the mare stumbled, fell and died a few instants later from a suspected aortic rupture, leaving her rider on the ground, visibly injured but conscious

Reiter-Journal reported that dressage rider and doctor by profession, Klaus Steisslinger, immediately gave first aid to Schneider, who was then transported by ambulance to the local hospital for a check-up. The 51-year old rider was in shock and sustained minor bruises.

Rock 'n Rose began her sport career under Andrea Lahmeyer, her breeder's daughter, after which Luxembourg's Ferdinand Wetz competed her at FEI level. She then sold the the Heicke family and was trained  by Oliver Luze before Schneider took over in August 2013.