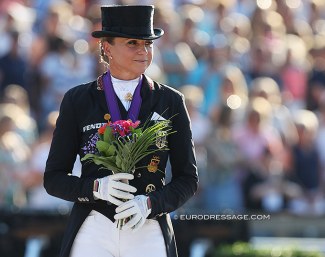 German Olympian and medal winning team rider Dorothee Schneider has been diagnosed with a fractured collarbone. The A-squad rider sustained the injury last Sunday 18 April in a tragic accident at the national show in Pforzheim.

Schneider and the 17-year old Hanoverian mare Fohlenhof's Rock 'n Rose (by Rubin-Royal x Feiner Stern) had placed third in the Grand Prix with 71.733%. During the lap of honour the mare suddenly collapsed and died of an aortic rupture, injuring the rider in the process.

Schneider was given first aid on the scene by Dr. Klaus Steisslinger and was then transported to the hospital by ambulance.

She has been diagnosed with a broken collar bone and will need to rest up for it to heal. She will not be out of the saddle for long, though.

"The time off out of the saddle will be as short as possible," Dorothee's husband Jobst Krumhoff told Eurodressage. "Dorothee and the medical experts are optimistic, that she‘ll be fit fo the upcoming  German selection process for the Olympics. At the moment her team members keep all horses including the top ones in good shape."

Schneider has three horses in the running for team selection: Showtime, Faustus and Sammy Davis Jr.