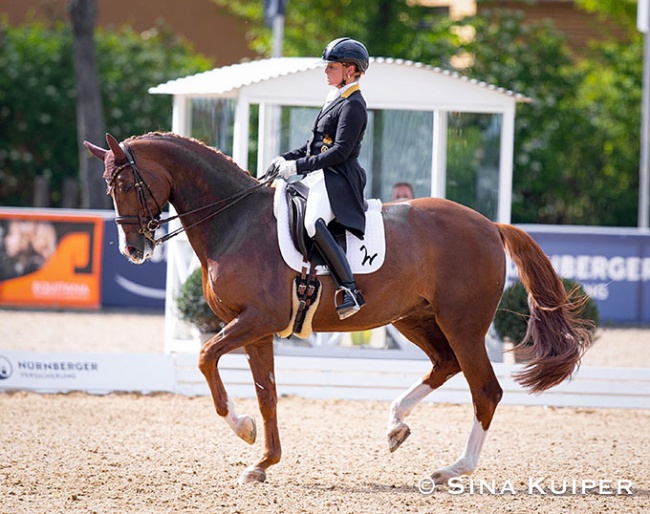 Isabell Werth and Bella Rose made an impeccable come back to the competition ring after a 20 month break from showing. The pair smoothly won the Grand Prix for Special at the 2021 CDI Mannheim on Wednesday 28 April 2021.

Werth and Madeleine Winter-Schulze's 17-year old Westfalian mare (by Belissimo M x Cacir AA) last competed at the 2019 European Dressage Championships in Rotterdam, where they swept the board and won triple gold.

The 2020 corona year with a string of cancelled shows and the official postponement of the Olympic Games in Tokyo gave the mare with sensitive health a welcome break from competition sport.

Her come back was anticipated for the 2021 German Dressage Championships in Balve on 3 - 6 June 2021, so great was the surprise when Isabell suddenly trailered Bella Rose to Mannheim, without her start being officially declared with the FEI on the entry list. Show organizers have the liberty to fill a field with late entries, no matter if they were entered with the FEI or not.

There was absolutely no sign of ring rust to be seen on the chestnut mare in Mannheim. The highly decorated Bella Rose shone as usual in her highlight movements and her weak points remained the same.

Werth began her ride with a strong halt at entry. The extended trots are the mares literal sore spot as she becomes Paso fino quick and hurried and is unable to achieve any overstep in the ground cover (the judges score this 6.5 - 7.5) . However, she immediately followed that up with the most brilliant trot half passes and a very good rein back. The first passage was a bit swaying at the onset, but had nice suspension. All three piaffes were impeccable in the rhythm, on the spot and the transitions in and out were seamless. Overall one wishes to see a bit more sit behind and lowering of the haunches in piaffe instead of a leaning on the shoulders, but Werth seems to trade that card for the sake of rhythm. The extended walk had much overtrack, but the clarity of rhythm is not the greatest (6.5 - 7.5), the collected walk was ambling nearing M (6.5 - 8). The second piaffe-passage was fantastic although a few piaffe steps were uneven behind. The canter work started out very securely: good two tempi's, a correct zig zag (although they could be more ground covering), a  strong canter extension. Then there was a mistake in the ones (4 - 6) and although the pirouettes were cadenced, the mare needed to collect and sit more behind. The final centerline was delightful.

"That wasn't so bad for a spontaneous action. I'm very happy," Isabell commented after her ride. "I actually just wanted to bring her for training, but yesterday we decided to ride her in the Grand Prix."

Based on the performances at the CDI Hagen and CDI Opglabbeek last weekend, where the Dutch showed they are relying on an armada of Totilas' stallions (Toto Jr, Total U.S., Governor and gelding Go Legend, alongside stallions Dream Boy and Desperado), the absolute world elite seems to be dominated by mares at the moment.  Isabell Werth has Bella Rose and Weihegold, Germany's new candidate for that number one spot is Jessica von Bredow-Werndl on mare Dalera (they beat Weihegold in Salzburg) and Charlotte Dujardin has mare Mount St. John Freestyle knocking at the door.

Von Bredow-Werndl also has mare Zaire-E as second option. The 17-year old KPWN mare (by Son de Niro x Jazz) is electric to ride, but finally with age she has become more stable and mature in her performances. In Mannheim she produced a lovely test. Zaire E is incredibly light footed, quick and nimble in her gaits. Her passage is off the ground and agile, her piaffe showed ability to lower the haunches and to stay meticulously on the spot. The second trot extension was on two tracks and crooked to the left and in the zig zag she got quite tense, but the pirouettes were a true highlight with her sitting and collecting properly.

The next five places were filled by combinations that all scored in the 72% range.

Matthias Rath and his hunky breeding stallion Foundation (by Fidertanz x De Vito) placed third on 72.978%. The 13-year old Hanoverian looks quite the macho in the arena with his big neck and phenomenal trot extensions. In the half passed he showed much freedom in the shoulder, but trailed a bit behind. The passage is regular, though could be a bit more engaged and in the piaffe he is still seeking the balance, but the potential is there. The pirouettes were lovely, but there was a mistake in the one tempi changes.

German based Brit Susan Pape rode the American owned Harmony's Eclectisch (by Zenon x Olivi) to a fourth place with 72.957%. The 12-year old stallion still appears green at Grand Prix but all the movements are correctly trained and there. They just need to play out right in the test. The piaffes needed to be more on the spot and suspended, and sometimes in the passage the hindlegs lacked engagement, but especially the collected walk was very well ridden and the pirouettes were nice.

Hubertus Schmidt and the American owned Denoix PCH (by Destano x Pik Noir) completed the top five on 72.674%. The 9-year old stallion is in his first year in the classic Grand Prix tour after having done the developing GP classes (Louisdor Cup) in 2020. He is still baby at Grand Prix and when the effort is big for him, he flattens the ears and does not give the happiest expression, especially in passage. Still, in piaffe he is nice and straight in the front leg (which indicates that the balance is right) but there could be more lowering of the haunches. There was a very clear extended walk that needed more overstep. Overall Denoix obediently executed the movements, but he just needs more time to develop more self carriage.