Bella Rose to Make Come Back at 2021 CDI Mannheim 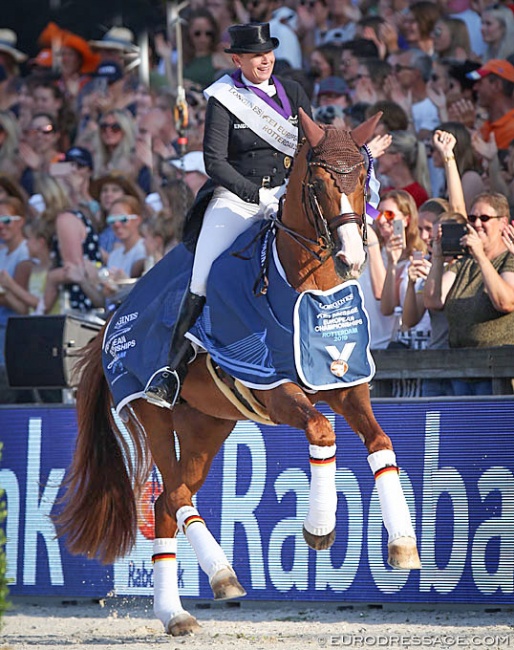 Bella Rose, Isabell Werth's number one ride in the barn and the FEI World Number One ranked horse, will make her long awaited come back to the arena at the 2021 CDI Mannheim.

The CDI Mannheim starts on Wednesday 28 April 2022 and the 4* competition runs until 30 April.

Both Weihegold and Bella Rose passed the horse inspection today.

The Euros in Rotterdam in August 2019 was the horse's last competition. Werth opted not to ride the mare in the 2020 corona year and Mannheim will now be the horse's first start of 2021 in the lead-up to Tokyo team selection.

Germany's Olympic team selection will be based on performances at the 2021 German Dressage Championships in Balve (3 - 6 June) and the CDI Kronberg (26 - 29 June).

The definite entry list for the CDI Mannheim closed on 8 April and Bella Rose was not on the Master List published. Substitutions were allowed to be made until 27 April, but in principle the horse needed to be entered by 8 April on order to be considered for substitution.

On the Master list published by the FEI on 9 April, Werth was listed with one horse: Emilio. However, a "newer" version of the Master List of 26 April showed Weihegold on the list with Emilio removed and still no Bella Rose.

Thomas Baur, Chair of the Dressage Organizers Club (DO), explained to Eurodressage that show organizers have the flexibility to allow riders and/or horses to enter past the definite entry deadline of the FEI. "For the Organising Committee (OC) the definite entry is about numbers. The OC can also accept other riders after the definite entry date, if they have room to accommodate them," Baur stated.

Werth also brought her number two to Mannheim, the 16-year old Oldenburg mare Weihegold (by Don Schufro x Sandro Hit), whom she last competed at the 2021 CDI-W Salzburg in January, winning the Grand Prix but placing second behind Jessica von Bredow-Werndl on Dalera in the Kur.

The 2021 CDI Mannheim was able to attract a highly international field of competitors, with several interesting new duo's making its CDI debut.

Australian Lyndal Oatley is making her international debut on Elvive (by Tuschinski x Don Schufro). She purchased the mare in 2017 and recently made her national Grand Prix debut, scoring 76%. She also brings Eros (by Sir Oldenburg x Ferro), whom she premiered in Herning in October 2020.

German Frederic Wandres is scheduled to ride Bluetooth OLD (by Bordeaux) for the first time in the international arena. The Russian owned horse was first presented at Grand Prix level by Ingrid Klimke, but then allocated to russian Anna Pyrkina in the hopes of qualifying on the Olympic team. Owner Knyaginicheva then decided to sell Bluetooth and shipped him to Helgstrand in Denmark to be sold. A sale did not happen and the horse returned to Hof Kasselmann, coming full circle as he started his sport career as a youngster there. Wandres will make his debut with him in Mannheim.

Dorothee Schneider was supposed to make her come back with her number one, Showtime, with whom she won two silver medals at the 2019 European Championships, but her fractured collarbone keeps her from riding for a while.