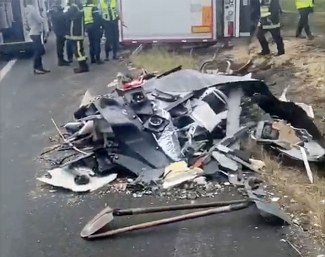 Finnish Grand Prix rider Joanna Robinson has lost one horse in a horrible road accident that took place in the south of France on her way to The Netherlands on Friday 30 April 2021.

The Spanish based Robinson recently bought Platinum Stables in Riel, The Netherlands, as her new home for her business, VIX Equestrian, and was moving her horses north when the accident happened

Robinson's truck ran a flat tyre and was parked on the shoulder of the A63 motorway near Magescq (FRA), waiting for roadside assistance, when a Portuguese truck smashed into her parked lorry and destroyed it.

It took the French gendarmerie 8 hours to clear the scene and for normal traffic to resume.

There were five horses on board and one had to be euthanised on the spot due to its injuries. Robinson lost her 6-year old CDE Spanish sporthorse bred Leo.

Two horses are severely are injured, the other two sustained no life threatening injuries.  Joanna's international Grand Prix horse San Coco di Amore was not on the lorry and is already in The Netherlands.

"Glam and Dundee both have some nasty wounds that even in the best scenario will take quite some time to heal," Joanna explained. "Snoopy got lucky having a big wound above the eye, but the eye itself looks fine. Azúcar seems the least affected, but it’s too early to say yet whether in the next days we will still discover some more injuries on all the horses."

The horses were temporarily moved to Ecurie Le Pape in the vicinity.

"Me and Silja feel quite shaken and achy and like having the worst hangover ever," she said. "But I think we’re ok. Just in shock still for what has happened. And knowing that it could’ve been so much worse.⁣⁣

Joanna shared a video of her destroyed truck on social media and accuses drivers with the awful road manners and their inconsideracy on the roads.

"We had a tyre break and while waiting for help on the right side of the road with hazard flashers and warning triangle put, a truck crashed onto us in full speed. At the time of the crash we were sitting inside the truck. Just before the big hit we were worrying about trucks passing us in such high speed," she explained. "Even when the police was already there, people were speeding by the accident site honking their horns.. Just unbelievable."⁣⁣