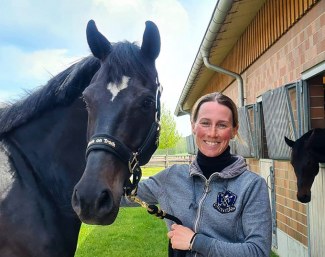 Zaëta de Malleret is a 2014 born Oldenburg mare by Zonik out of Sadira de Malleret (by Sir Donnerhall). She is bred in France at Haras de Malleret in Le Pian Medoc near Bordeaux.

Zaëta's incredible pedigree gave her the genes to be an eye catcher from the start. As a foal she won the 2014 French Foal Championship in Saumur.

She was first competed by Malleret's in-house rider Maria Jose de la Chica Parras in 2018, finishing 9th at the 2018 French Young Horse Championships for 4-year olds.  In 2019 the pair was briefly based in Germany and rode at some local shows in Sottrum and Penningbüttel, before Alfonso de la Chica Parras took over and headed to the 2019 French Young Horse Championships, where they were 13th in the 5-year old division.

Haras de Malleret changed strategy in 2020 and allocated the ride on some of their top youngsters to international Grand Prix riders across Europe, partnering for instance with Dorothee Schneider, Jessica von Bredow-Werndl as well as with French Morgan Barbançon. Zaeta moved to Morgan's stable in Geneva, Switzerland, in June 2020. In August the new duo made their international show debut at the CDI Pilisjaszfalu (HUN) in the 6-year old division.

The partnership between Morgan and Zaëta concluded amicably in September 2020 and Zaëta moved back home to France, where Alfonso temporarily took over the ride.

Gérald Martinez, managing director of Haras de Malleret, believes his best horses should go to the best riders and found a new match for Zaëta in Helen Langehanenberg.

"Zaeta is not the biggest but her talent is great and a lot of taller horses are envious of her qualities. She has all the potential for top level thanks to her basic gaits, but also her big heart and temperament to win," said Martinez. "Although she matured a lot last year, she will need time. She has a lot of temperament but always tries to do her best for her rider. I am confident in her future."

The 160-cm standing Zaëta makes an elegant picture with Langehanenberg, who accepted the mare into her barn this year. The goal is for them to qualify for the 2021 World Championships for Young Dressage Horses in the 7-year old division.

"We already tried last year but Helen had her stable full at the time. We are very happy that this year a box was free for Zaëta to join her programme," Martinez continued, "I always believed in the harmony Helen and Zaëta could generate together. Helen has talent to develop young horses to top level. I hope that they will soon shine together."