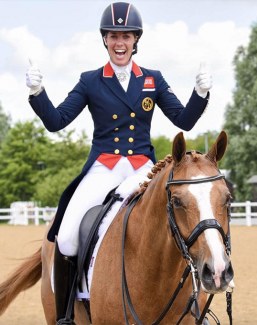 At the inaugural 2021 CDI Wellington in Hampshire, UK, reigning Olympic Champion Charlotte Dujardin rose to the top of the board and achieved another 1-2 in the Grand Prix on Wednesday 12 May 2021.

The Wellington Grand Prix gathered the best of Britain as the class was marked as an Olympic qualification class. A panel of five experienced 5* judges officiated for this class but it was striking that they did not always find accord in their assessment of the big name riders.

The ground jury was made up of Peter Storr (GBR), Isobel Wessels (GBR), Susanne Baarup (DEN), Mariette Sanders-Van Gansewinkel (NED) and Maria Colliander (FIN). The British judges were the only two that rewarded two riders (Charlotte Dujardin and Carl Hester) with marks over 80%. All other marks stayed below that magic eighties marker.

In the autumn of 2020, Dujardin took her two Grand Prix rides, routinier Mount St. John Freestyle and rising star Gio, to the CDI Keysoe and captured first and second place, easily. Last month she rode both horses at the CDI Hagen in Germany, but in separate tours so there was no duel between them. Today in Wellington, the benjamin of the barn, Gio, outshone Freestyle with a faultfree ride and captured the trophy.

Charlotte and her own and Renai Hart's 10-year old KWPN gelding Gio (by Apache x Tango) dominated the field of 31 competitors. The cute chestnut pocket rocket does not betray his Dutch heritage and gets a bit harness-horsey in the extended trots, knees high and quick instead of truly lengthening stride and frame, and gaining momentum. At the beginning of the test, Dujardin was very busy with her hands, holding them high, lifting them up and it meddled with the harmony of the overall silhouette. However, she rode sweeping trot half passes, good diagonal steps in the rein back, and a good relaxation and stretch in the extended walk. The passage is springy and electric, but Gio struggles with the balance and self carriage in the piaffe: he leans on the shoulders and crosses the hindlegs. The canter strike off was a bit iffy, but the two tempi changes were very ground covering, despite some swing to the left. The zig zag was ridden with risk, the flying change after the extended canter short behind, the left pirouette was lovely, the right one a bit big. Gio still had lots of energy for the final passage on the centreline.  He scored a generous 79.130% with marks ranging from 77.174% to 80.978%.

Dujardin's more seasoned ride, Emma Blundell's 13-year old Mount St. John Freestyle, logically looks much more polished and mature than her stable mate Gio, but today an atypical spook put a spanner in the works and mistakes ensued. The mare has massive shoulder freedom with which she can show off in the trot extensions and half passes. The half pass to the left got slightly uneven in the rhythm by throwing passagy steps in the mix. The rein back that followed was tense. The passage work was smooth as ever, with huge engagement from behind. The first piaffe was early to the marker, but nicely on the spot. The extended walk was ground covering and rhythmical. The collected walk was more a medium walk (scores 7.5 - 8). She spooked in the second piaffe and also the passage that should have followed didn't happen. The canter strike off went wrong completely. Charlotte had to bring the mare to a halt and re-try (scores 3 - 7). The two's were wonderful, the extended canter could have swung a bit more over the back, but the zig zag was sweeping. One of the changes in the ones was not through behind (7 - 9). The pirouettes were small. Dujardin finished on a high note with a lovely passage, even though it was a fraction crooked to the left, but ridden in a nice rhythm. She still scored 77.935% for that test, and marks ranged from 76.630% to 79.348%.

The almost black bay is maybe one of the most talented horses in the UK and certainly expertly ridden, but his Jazz genes sometimes get the better of him.. He is willing and obedient, but the inner body tension is there and the horse grinds its teeth. The trot extensions are truly not expansive enough, not achieving enough overtrack, although Hester has the horse in a nice frame. For your information, no overtrack but nicely presented by a big name rider means 7.0 (or more) with the international panel of judges. The half passes were lovely, but En Vogue dragged his feet in the rein back. The passage is super elegant and lightfooted and in piaffe he can really stay on the spot, lowering his croup, but overall the balance needs to improve. All in due course. The walk is the horse's weak point: he does not truly march in the extended walk and in the collected he ambles, close to pacing (5.5 - 6.5). The two tempi's were secure, the flying change at the end of the extended canter diagonal was short, the zig zag was very nice, but there was a mistake in the ones.  The pirouettes were wonderful with the horse taking the weight behind and there was a good rhythm in the piaffe at X.

The test had wonderful bits and some work-in-progress parts. The British judges had the pink glasses on and rewarded the test with 80+%, the Dutch judge was more critical of what was shown and scored it 72.935%.

Hughes and Faurie in Top Five

The fourth place was captured by Gareth Hughes on Judy Williams' 11-year old Oldenburg gelding Sintano van Hof Olympia (by Sandro Hit x Silvano N).  The bay is new to Grand Prix and still comes across as very green.  He was not entirely even behind in the extended trots and also in the passage the right hind leg trailed behind, but Hughes rode big half passes and a very nice collected walk. In piaffe Sintano stays well on the spot but needs to come up more in the withers. The horse was always busy in his mouth and there was a mistake in the two tempi changes. The ones were correct, although he stayed a bit croup high. Sintano does have the potential to collect and take the weight, as shown in the rather big pirouette left, the right one was still a bit unbalanced. Overall Hughes smoothly steered his horse through the test, but Sintano needs to develop more self carriage. He still heavily relies on the rider to carry him through the programme. The judges were well wishing with their 73.783%. Individual marks ranged from 70.652% to 74.891%

British WEG team rider Emile Faurie landed fifth place aboard Theodora Livanos' 14-year old Oldenburg gelding Dono di Maggio (by Dimaggio x Santander). They were the third combination to go in the class. There was a break in the first trot extension, but the half passes were ground covering and the rein back well ridden. Dono di Maggio has a stunning passage with much power and airtime (7 - 8) and his piaffe is well established. The chestnut did not achieve much overstep in the extended walk. The two tempi's could have been more polished, but the extended canter was powerful. The pirouettes put 7 - 7.5 on the board and there were 8s for the final piaffe-passage centerline. They scored 72.391%

Fiona and the 13-year old British Hanoverian (by Diamond Hit x Regazzoni) rode their first international as Olympic contenders and finished sixth with 71.848%. It showed that there were still testing the waters as a new combination and Fiona produced a safe round. The highlight were probably the extended trots, which were very even in the rhythm and good in overtrack. The hindquarters trailed a bit in the half pass to the left, but Fiona had a good flow going. Unfortunately in the first piaffe, Delicato dropped his head behind the vertical and that become a recurrent issue, also in the collected walk and second piaffe. In the extended walk he curled the neck instead of stretching it out, but the rhythm and overtrack were good. The passage work was soft and sweet, the tempi changes were well ridden but should have more uphill tendency. There was a mistake in the two tempi changes and the transition down to trot was wobbly.  Overall it was a good first international test, safe and obedient, but the sparkle was not yet there.