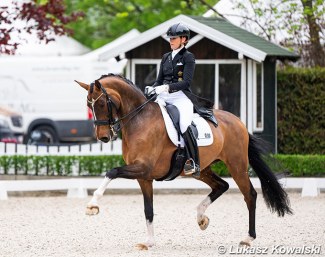 Husband Patrik Kittel and wife Lyndal Oatley achieved some serious couple goals at the World Cup qualifier in Mariakalnok, Hungary, on 6 - 9 May 2021. The German based dyad swept the entire big tour, taking home no less than four trophies on Sunday.

In the Grand Prix Special tour, Australian Olympian Lyndal Oatley made her international show debut aboard the 12-year old Dutch mare Elvive (by Tuschinski x Don Schufro x Cocktail), which the  Oatley family purchased in March 2017. The couple's rise to Grand Prix has been with a few interruptions, the mare struggled with some health issues and Lyndal took it easy with her pregnancy and the birth of her daughter Emilia.

Lyndal is now back with guns blazing after making a national Grand Prix show debut that earned her a 76% score. At their first CDI together, the pair won the Grand Prix for Special with 73.087% and the Special with 73.638%, immediately launching themselves as strong contenders for an Australian Olympic team spot.

"She (Elvive) is a freak and I am the lucky person guiding her on her journey, said Lyndal. "I never take a second with this horse for granted and this is only the very beginning of what she has to offer." Husband Patrik added that Elvive, "is one of the best horses I have ever had the pleasure to train. Lyndal did an amazing test. I could not be more happy. Acouple of more shows so that dressage can speak and then the sky will be the limit."

Lyndal also has a second Grand Prix horse to ride, Eros, a 12-year old KWPN bred gelding by Sir Oldenburg x Ferro x Pion, with whom she finished third twice in the Kur tour with 69.413% and 74.760%

Husband Patrik Kittel, a long-time Swedish team rider, had his ups and downs in Mariakalnok. With his top horse, the Swiss owned Well Done de la Roche CMF (by Furstentraum x Walt Disney), he was eliminated at the end of his Grand Prix test for blood in the horse's mouth, which cut the pair's Mariakalnok campaign short.

However, aboard Andreas Helgstrand's 11-year old Westfalian Bonamour (by Bonifatius x Rousseau) he claimed the World Cup victory in the Kur tour, moving into the winner's circle for the Grand Prix on a score of 74.000%. They bagged World Cup points by acing the freestyle with 80.325%.

About the show in Hungary, Patrik said that "it was so nice (to compete) with some audience again. I missed that."

Mariakalnok was the combination's first international start. Bonamour was previously owned by Korean Dong Seon Kim and competed at Grand Prix level by German Olympian Hubertus Schmidt in 2019 before the horse sold to Helgstrand in horse swap, which include the trade of Danish WEG team horse Belstaff to Dong Seon Kim.

Salzgeber In Charge of Small Tour

German Olympic silver medal winner (2004), Ulla Salzgeber made her return to the arena aboard the 9-year old Hanoverian Liberte (by Londontime x Acord II). Purchased as an investment horse to be trained up the levels, Ulla has only competed it once before in the international ring, at Mariakalnok, a year ago.

"I'm almost over the moon," said Ulla Salzageber after her victory in the Prix St Georges. "To hear the German national anthem after four years for our win made it a really emotional moment."