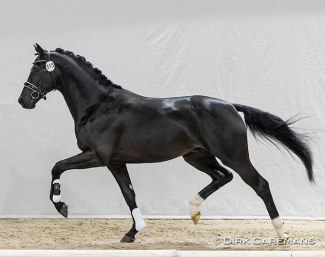 On Friday 14 May the 2021 KWPN Spring Stallion Performance Testing will finish in Ermelo, The Netherlands and just a lonely two 4-year old colts have made it to the finish line. Eight 3-year olds will complete the testing tomorrow.

At the half-way point, three colts left the testing and were taken home: Nero DDH (by Everdale), Nolegro (by Painted Black), and No Way (by Governor).

Right before the last day of the 21-day testing, three more 3-year olds were removed and will not do the final exam. Nebrasko Bo (by Ferdinand x OO Seven), Nescio (by For Ferrero x Osmium), and Nachtwacht in 't Veld (by Incognito x Everdale) did not complete the test.

Still in the running for the final exam on 14 May are:

Thirteen 4-year old colts began the 21-day testing as the corona year of 2020 upended the normal calendar and colts were given a pass to breed without having done the performance test due to the extraordinary circumstances.

They have been covering mares in 2020, but by dropping out now, they have no completed the mandatory phases to obtain full approval.

The two colts still doing their final exam are: