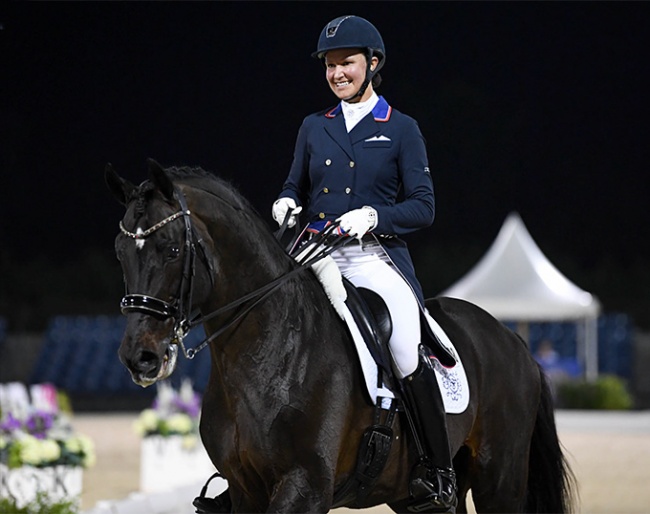 The 14 athlete-and-horse pairs on the U.S. Dressage Olympic Short List took their final trip down the centerline at the Palm Beach International Equestrian Center (PBIEC) in Wellington, FL, on 11 June 2021? contesting the Grand Prix Special Test at the U.S. Dressage Mandatory Observation Event, aka the U.S. Olympic team selection event.

The U.S. Dressage Mandatory Observation Event served as the final opportunity for the combinations named to the U.S. Dressage Olympic Short List to compete in an atmosphere comparable to what the team’s experience will be in Tokyo, Japan later this summer.

The combinations named to the final roster of three competitors and one traveling reserve, will be announced no later than June 21, 2021.

“I’m super excited. I think we have three extremely strong combinations who are capable of scoring above 80 percent, and I don’t think we’ve ever had this type of depth before. There were many great rides tonight and it’s exciting for U.S. Dressage,” said Debbie McDonald, Chef d’Equipe of the U.S. Dressage Team. “This event was the smartest thing we could have done in this year with all the various challenges and logistics. Hopefully when we get to Tokyo it will pay off, but either way, it was a good for these riders to feel what the horses were like in this environment.”

Adrienne Lyle (Wellington, Fla.) and Betsy Juliano LLC’s 14-year-old Hanoverian stallion, Salvino, turned in the top test of the evening, posting a new personal best score of 81.830%. Lyle selected a soundtrack of that included a mix of classical music and oldies for her Grand Prix Special to Music, matching the stallion’s energy and elegant movement.

“I wanted to be able to put in another solid test with him and I have to say he feels really good. I had one of the best feelings I’ve ever had in the warmup,” said Lyle. “The piaffe and passage felt really secure and confident. The final centerline felt super, and he came out of the ring feeling fresh and fit. I think that was a huge test in this heat and humidity."

"He is the horse you want with you down in the trenches. He totally gets it. If I start to slip up, he is always right there to catch me and those kinds of horses are special and there are not many like that which you get to sit on in your lifetime,” added Lyle, as she talked about her relationship with Salvino.

Peters and Schut-Kery, Second and Third

Steffen Peters (San Diego, Calif.) continued his long streak of exceptional results with Suppenkasper, a 13-year-old KWPN gelding owned by Four Winds Farm, just narrowly missing the 80% mark with an average score of 79.532%. Peters rode the impressive gelding to a mix of music that included pop hits by Coldplay and Snow Patrol.

After earning a personal best in Wednesday night’s Grand Prix, Sabine Schut-Kery (Napa, Calif.) and Sanceo, Alice Womble’s 15-year-old Hanoverian stallion, had another banner performance, earning a 78.298% to round out the top three.

Nick Wagman (San Diego, Calif.) and Don John, a 13-year-old Dutch Warmblood gelding owned by Beverly Gepfer, finished in fourth place with a score of 76.043%. Olivia LaGoy Weltz (Haymarket, Va.) and Rassing’s Lonoir, a 17-year-old Danish Warmblood gelding owned by LaGoy-Weltz and Mary McPhail, received a 75.170% from the judging panel for the fifth best score of the night.