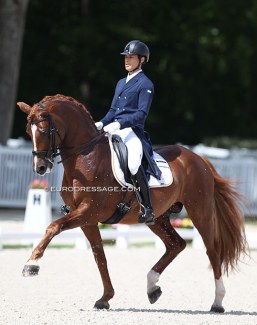 The Japanese Olympic dressage team that will most likely represent the home nation at the 2021 Olympic Games in Tokyo has been announced, following a special team selection event held in Courrière, Belgium, on 7 - 9 June 2021.

Based on the performances in the CDI ring this 2021 show season as well as the dedicated selection event in Courriere, the Japanese selectors have been able to get a picture of the four top riders for the team.

Officially these riders still need to be ratified and nominated by the Japan Equestrian Federation and Japanese Olympic Committee despite announcements on social media, but changes are unlikely.

A group of 15 to 20 combinations, which have achieved their MER scores,was expected to compete at the selection trial in Belgium. In the end  12 combinations were entered, but only 7 pairs (5 riders of which two had two horses) showed up in Belgium.

The selection event was a mock competition with arrival on 7 June with a vet check, doping test and draft of the starters lists. On 8 and 9 June the riders competed in a Grand Prix test, judged by a panel of 5 and 4* judges, including Susanne Baarup (DEN), Freddy Leyman (BEL), Gotthilf Riexinger (GER), Raphael Saleh (FRA) and Olivier Smeets (BEL).

Japan will be represented by the following riders in Tokyo

The team captain is Mariette Withages (BEL) and the team trainer is Christoph Koschel (GER).