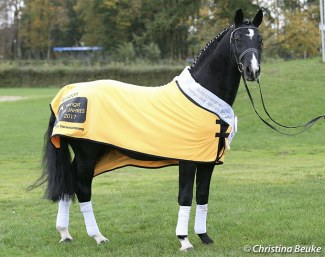 The Celle state stud stallion Rotspon has been retired from active breeding service. He is 26 years old.

"Rotspon found it harder and harder to jump on the fantom," Celle announced. "We had hoped that he would still be able to do this paternal duties as he's still fresh and clever, but it's not so. That is why in the best interest of the horse we decided to no longer offer his fresh semen."

Rotspon is by Rubinstein out of Antalia (by Argentan I x Pik Bube I x Wendekreis). He is bred by the late Hans-Heinrich Müller.

He was the reserve champion of the 1997 Hanoverian Stallion Licensing, where the state stud Celle acquired him. They named him Rotspon, a tradition-rich North German expression for high-quality red wine.

Rotspon went on to win the 300-day stallion performance test (HLP) in Adelheidsdorf in 1998 with an overall score of 145.67 points. He scored a dressage index of 148.72 points and for show jumping he got 118.74 points. He beat 1997 licensing champion Londonderry at the time (though Londonderry already became Hanoverian Stallion of the Year in 2013) and breeder Hand-Heinrich Müller received the Freiherr von Stenglin-Award in 1999 for Rotspon's HLP victory.

He sired 30 licensed sons in Germany, amongst them U.S. Olympic team horse Rosevelt, Rascalino, Royal Blend, and Re Primeur. He sired 122 state premium mares, amongst them first crop mare Romanze, winner of the 2002 Ratje Niebuhr-Show in Verden.

In 2017 he was proclaimed Hanoverian Stallion of the Year.