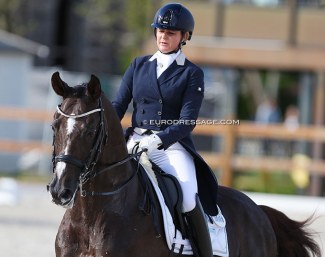 Tanya Seymour has been nominated by the South African equestrian federation as her country's individual starter in dressage at the 2021 Olympic Games in Tokyo.

Her selection will soon be ratified by the South African Olympic committee.

"I'm very excited to be able to take part in Tokyo for a number of reasons," Seymour told Eurodressage. "I'm proud to be able to go to a second olympics under the South African flag. It's great for the equestrian sport in South Africa to be able to be represented at such an event and hopefully encourages more growth within the sport."

South Africa qualified an individual for the Tokyo Olympics in 2019.

Since then, Seymour had to wait until the CDI Grote Brogel on 14 May 2021 to achieve her official Olympic confirmation result She scored 67.065% in the Grand Prix.

Seymour and Ramoneur showed at the 2020 CDI's in Amsterdam, Neumunster and Gothenburg and the 2021 CDI's of Mannheim and Exloo but always stayed a fraction short of the confirmation score. In Grote Brogel they clinched their Olympic ticket.

The 37-year old Seymour will be representing her country on the 19-year old Oldenburg gelding Ramoneur (by Rohdiamant x Alabaster).

Bred by Bettina Schulze-Schleppinghoff, Ramoneur has been Seymour's equine partner since he was a youngster at the time that Tanya worked for Ludwig Kathmann in Vechta, Germany.

"What better final international show and official retirement than the Olympics for Ramoneur," Tanya explained. "The horse means the world to me, his health and happiness is always my number one priority. He feels great at the moment and loves to compete. He competed in Doha twice and rio and travelled well with no problems with the heat so I'm quite confident that he will be able to handle the climate well."

She continued, "due to the limited number of shows due to corona and herpes I decided my young horse would not have the experience needed in time and while Ramoneur was still fit and well, it would be great way to finish his unbelievable career. I hope we are able to ride an amazing test and do South Africa proud. After tokyo Ramoneur will stay with me forever enjoying his retirement with lots of love."