Farriery and Footing: The Crucial Keys to Olympic Equine Performance 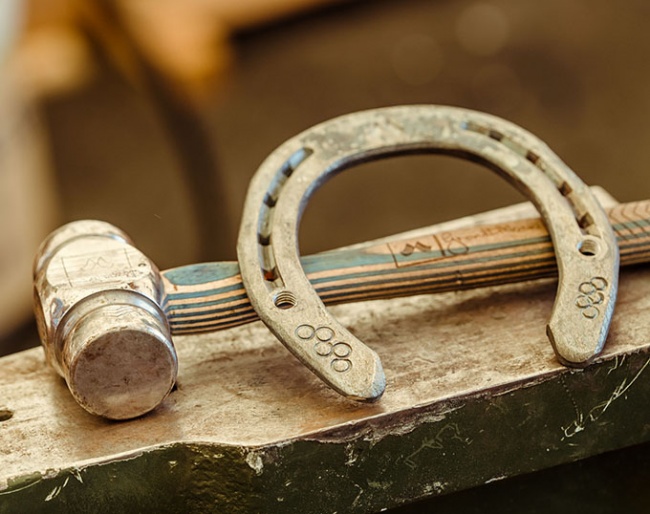 The Olympic Games are all about the coming together of the best of the best and the human and equine athletes have been meticulously prepared for the occasion. An essential part of that preparation is shoeing, and just as with human athletes, a horse can only perform at its best if the shoes fit perfectly.

This is where Olympic lead farrier from London 2012 and Rio 2016, Ben Benson (GBR) comes into play here at Baji Koen Equestrian Park. Benson is working together with a hand-picked international team and 18 Japanese farriers to provide an all-round shoeing service to the onsite horses.

While many teams bring their own horseshoes, the equine shoe shop – officially known as the farriery – is stocked with 10 to 12 different styles of shoes in eight different sizes. And Ben Benson and his team can copy any type of shoe, the goal being to change as little as possible.

As well as being able to analyse the biomechanics and balance of a horse, it is equally important for the farriers to know exactly what type of shoe is needed for each of the three Olympic Equestrian disciplines here in Tokyo – Dressage, Eventing and Show Jumping. For horses competing on sand, a shoe with a light grip is preferable to keep their feet on top of the surface, whereas on grass a firmer grip is required.

“It’s all about traction and support”, Benson explains, “but a set of shoes is only as good as the person who puts them on.”

Shoes for Dressage horses should have a degree of flexibility, allowing them to perform set patterns of movements on the flat. For the Cross Country, Eventers need a more concave shoe, which can cut into the grass footing and provide stability. The Jumpers will look for a something in between the two and, as for the Eventers, will need the option of customising with studs for extra grip when needed.

As with so many things in life, the devil is in the details. Every extra centimetre on a hoof adds 50 kilograms to the horse’s back, potentially leading to imbalance and emphasising the importance of re-shoeing horses on average every four to five weeks. In an ideal world, horses arrive at the Olympics having been shod just before leaving for the Games, and head back home in time for their next shoeing. But the quarantine period horses had to undergo prior to arrival in Tokyo meant many horses have reached their shoeing deadline onsite, so Benson and his team have been kept busy.

To be selected to be part of an Olympic farriery team is a career highlight, and Benson is always eager to share his incredible depth of knowledge and has provided invaluable know-how to numerous farriers over the years.

Being lead farrier at multiple Olympic Games comes with a lot of responsibility. It requires building a relationship of trust with the athletes and their support personnel, as well as excellent communication within the farrier team.

“It’s not always easy when the stakes are this high”, Ben Benson says, “but it is clear that everyone at the Olympic Games is an expert in their field. Despite the immense pressure, athletes need to trust that the team is made up of the best farriers in the world and that their horses are in the best possible hands.” And they are!

But the farriers are not the only ones with a lot of responsibility on their shoulders. Those in charge of the arena surfaces, or footing, also have a big role to play.

As with human athletes, the leg and hoof of the horse withstand great forces when the hoof makes contact with the ground, especially as horses weigh over half a tonne. And when the horse is moving at speed or turning, those forces increase, whether they’re competing on grass or an all-weather sand surface.

Creating the perfect sand footing for the arena-based Equestrian sports has now become an exact science, with a complex layering system that ensures the best surfaces for the horses to perform on, whether that’s for Dressage or Jumping.

The Olympic footing at the Baji Koen Equestrian Park here in Tokyo – with exactly the same composition on the main field of play and all the training arenas – is top quality sand mixed with roughly 1.5% of polyester textile fibres. The sand provides impact firmness and grip, and the fibres provide cushioning, elasticity and responsiveness.

“Sand is the most important ingredient in footing, and then the textiles and fibres are like the spices in your soup”, Oliver Hoberg (GER), the man in charge of the arena surfaces says.

Keeping that mix right, and maintaining the footing is all part of his daily routine, which involves dragging (raking) and watering, but the balance needs to be expertly monitored so that the surface allows horses to produce optimal performances.

Hoberg works in extremely close cooperation with the FEI Footing expert, Professor Lars Roepstorff (SWE), the scientific brain in the partnership who conducts daily checks on all the Equestrian Park arenas with a “mechanical hoof” originally created for testing racetrack surfaces. The hoof, which has now been adapted for the different equestrian sports disciplines, mimics the load placed on the horse’s leg and hoof when performing a Dressage test or landing over a fence, whether that’s on sand or on grass.

“Special sensors measure both horizontal and vertical forces as the mechanical hoof hits the ground and those sensors measure the response from the ground so we can actually measure what the horse feels when it jumps on the surface”, Professor Roepstorff says. “The footing is absolutely crucial, both to performance and to the health of the horse, and the different functional properties of the footing will affect how the horse performs.”

Those different functional properties allow for “tuning” of the surface, depending on the sport. But the only way to produce perfect footing is through perfect maintenance to ensure uniformity on all parts of the arenas.

“The footing is only as good as the level of maintenance”, Oliver Hoberg says. “In fact maintenance is just as important as the type of surface used in the arena.”

With the correct level of maintenance, modern all-weather footing lasts up to 20 years, so there’s a great post-Games legacy plan, as all the arenas will remain in-situ when the venue is handed back post-Paralympics to its owners, the Japan Racing Association, so that they can continue to be used for equestrian sport for many years to come.

But for Games time, the right blend of footing, monitoring and maintenance will provide the supremely fit Olympic equine athletes with the optimal stage on which to produce their peak performance. And they’ll be wearing their best shoes too!

Related Links
Shoeing the Dressage Horse by Rob Renirie
Keeping Horses Barefoot: a Healthy Horse From the Ground Up
Fuego Dances with Castelijns' Rock 'n Roll Shoes
Practical and Scientific Information at 2009 Global Dressage Forum
Laminitis: A Serious Threat to your Horse with the Potential to Cripple and Kill