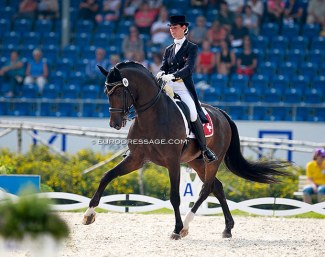 Greek Grand Prix rider Theodora Livanos has given the ride on For Compliment to French Sandrine Trillat  as her schoolmaster.

For Compliment is a 17-year old Rhinelander gelding by Fidermark out of Contiga (by Compliment). He is bred by the late dressage judge Peter Engel.

The bay was licensed for breeding and although he only bred a few years, he produced an impressive amount of offspring that has been successful in the show ring.

in 2009 Dr. Ulf Möller rode the Bundeschampionate qualifiers with him. German Kerstin Klieber acquired For Compliment for 140,000 euro at the PSI Auction in Ankum in December 2009.

Under Anna Sophie Fiebelkorn, For Compliment qualified for the 2010 Bundeschampionate in Warendorf, where they had a roller coaster journey.  They were last in the first round, fourth in the consolation finals, and made a spectacular rise to end up with the bronze medal in the 6-year old Finals.

In October 2010 Kerstin Klieber sold For Compliment to the Swiss based Greek pony rider Theodora Livanos, who at the time trained with Birgit Wientzek-Plage.

The ride on the then-stallion was allocated to Birgit, who produced the horse to Grand Prix level. She rode For Compliment in his international Grand Prix debut at the 2014 CDI Mannheim and competed him at internationals in Munich, Caselle di Sommacampagna, Mannheim, Compiegne, Fritzens, Hagen, Salzburg, and Neumunster. They represented Switzerland at the 2015 European Dressage Championships in Aachen, where they were 59th in the Grand Prix with 65.200%.

In 2017 Christian Pläge competed the horse for a season in Crozet, Le Mans and Geneva.

Theodora Livanos made her CDI debut on For Compliment at the 2019 CDI Le Mans in the Young Riders division. It was their first and only international together.

Livanos moved to Great Britain to combine university studies with training with Emile Faurie. Her horses Dono di Maggio, Robinvale and For Compliment joined her at Faurie's Heath Farm near Oxford.

For Compliment taught Theodora the first Grand Prix movements at home, while she focused on competing Robinvale and Dono di Maggio.

In the early spring of 2020 Livanos was diagnosed with osteomyelitis and underwent surgery to her femur in New York, an operation which kept her from riding for at least half a year. She recently returned to the U.S.A. for second operation and is soon commencing her studies at Oxford, scaling down on the amount of horses she can ride. She has therefore given For Compliment to her friend Sandrine Trillat.

Based at The Stable in Roquebrune-sur Argens in the French Riviera, Trillat welcomed For Compliment to her barn a few weeks ago.

Trillat also owns the stallion LaFerrari (by Le Vivaldi x Lauries Crusador xx) who was sent into training with Emile Faurie in the U.K.

"Finally the king is home," Trillat posted with excitement on her social media. "Welcome champion in your home for life with me."