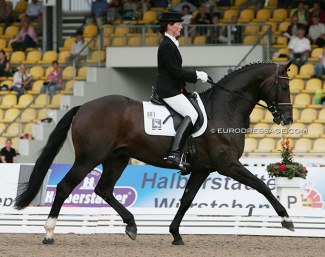 The Hanoverian licensed stallion Danone has been put to sleep on 11 September 2021. He was diagnosed with a liver tumour and could not be saved. He was 21 years old.

Danone was a 2000 born Hanoverian by De Niro out of Well Done (by Weltmeyer x Bolero x Windhuk). He was bred by Bianca Helmcke.

Danone was first licensed in a smaller licensing in Vechta for the Oldenburg verband in February 2004. Two months later he was also accepted for the Hanoverian society. His entire life he stood up for stud at owner Burkhard Wahler's place, Klosterhof Medingen.

He did his 30-day stallion performance test in Schlieckau in March 2004, scoring 8.59 for dressage and 7.32 for show jumping. He obtained his full licensed status by competing in two regional shows in 2004 and 2005.

Danone was first competed by Maike Löer in the summer of 2004 in the riding horse tests and in 2005 Nicole Kochskämper took over and rode him in a Bundeschampionate qualifier along with a few other L -level tests. At the 2005 Bundeschampionate he was 30th in the first round.

In 2006 he moved to M-level and represented Germany at the 2006 World Young Horse Championships in verden, where he was 12th in the finals after placing second in the consolation. In 2006 he also went to the Bundeschampionate but placed 34th in the first round. He won the consolation finals though.

Danone did no competitions in 2007 and returned to the arena once in 2008 with Theresa Wahler. Between 2012 and 2014 he showed in some regional Grand Prix level tests with Theresa, his last show being in September 2014 in Medingen.

Danone has sired 11 licensed sons in Germany and 31 state premium daughters. He has 403 offspring registered for sport in Germany.