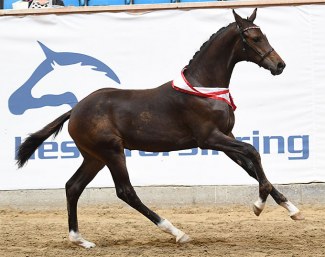 At the 2021 Danish Warmblood Elite Mare and foal Show at Vilhelmsborg last week, the best foals from the seven regional foal shows in Denmark gathered to compete for the titles of  best DWB foals of the year. Two powerful movers claimed the titles in the dressage filly and colt category.

In her sister’s hoof steps

Of the 13 dressage filly foals qualified from the seven regions in Danish Warmblood, the judges appointed four finalists. Last year the Elite Show was cancelled due to COVID-19, so the most recent show was two years ago where the dressage filly foal champion was called Vilard's Frina.

This year at Vilhelmsborg, the coveted title once again went to breeders Heidi Vilhelmsen and Lars Arndt from Stutteri Vilard for a full-sister of their previous champion filly. She was the regional champion in Vallensbæk, and at Vilhelmsborg Vilard’s Fina (by Franklin x Blue Hors Don Romantic) was invincible.

The judges described her as a"feminine, refined and at the same time large-framed filly with lots of energy and not least three supple, ground-covering and rhythmic gaits."

A colt with supreme gaits

In a very strong collection of dressage colt foals no less than six were selected for the final round, in which the regional winner from Esbjerg, Chicago Majlund (by Vivino x Tailormade Temptation), once again stood out as a spectacular mover.  He is bred and owned by Annika Pagård form Majlund Dressage.

The judges said that Chicago is "large-framed and masculine colt foal with a good expression." He showed the best walk of the day; "his walk is ground-covering and supple, swinging through his body." The trot is "rhythmic, supple and with very good self-carriage and his canter is powerful and uphill." Chicago Majlund was named dressage colt foal of the year.

Dressage filleies selected for the final:

Dressage colts selected for the final: