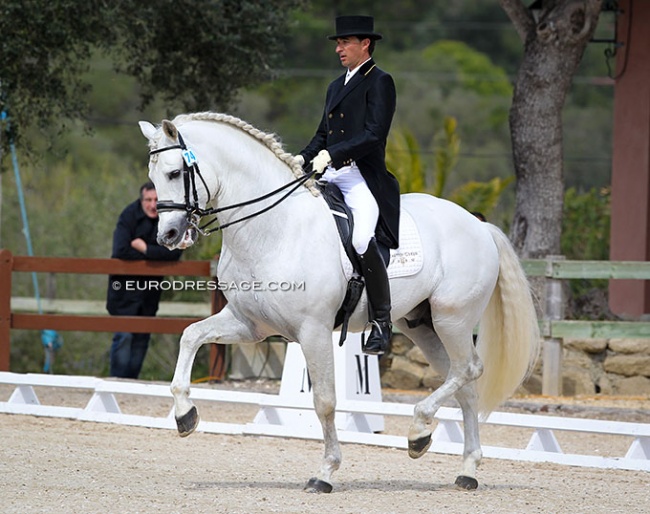 Encanto XI was a 2002 born P.R.E. stallion by Spanish dressage legend Evento x Golondrino XIV. He was bred by Kimberly van Kampen and was born in Spain out of HGF's Cantora XVI, which van Kampen had purchased there in 2001.

Encanto moved to Spain in the spring of 2007 to start his training with Jose Daniel Martin Dockx. The grey stallion became the first horse of Hampton Green Farm which Dockx rode into the international arena, shortly afterwards Grandioso followed which he took to the 2012 and 2016 Olympics. Encanto XI was the second horse Jose Daniel produced to Grand Prix in his career, San Rubino,

Jose Daniel Martin Dockx made his international show debut on Encanto XI in 2010 at small tour level at the Sunshine Tour in Vejer de la Frontera. They headed to the 2020 Spanish Small Tour Championships where they were third in the Prix St Georges, but retired in the Inter I.

A year later Vejer was the platform for their CDI debut at Grand Prix level. Martin Dockx and Encanto competed at international Grand Prix level between 2011 and 2013 with starts in Vejer, Saumur, and Nambroca. Their personal best score was 67.021% in the Special at the 2013 CDI Vejer, exactly the same score as on their debut in 2011.  The pair was coached by Jan Bemelmens.

Return to the U.S.A.

In 2013 Encanto XI sold to Wellington based American adult amateur rider Dr. Jane Bistline and the grey stallion moved back to the U.S.A.

Encanto XI made regular appearances at U.S. PRE Week during the Global Dressage Festival in the hands of handler Tom Reed.

"It’s never easy to report when a “unicorn” leaves this world, but in their place we live with the memories, experiences and photos of having known such a magical creature," said Van Kampen. "Encanto’s beauty was the subject of many paintings, and the grace of his movement amazed his public.  His beautiful head, sweet eyes, expressive and serene, and his extravagant movement made him a model of the modern Spanish sport horse."