Werth to Retire from Competition After 2024 Paris Olympics 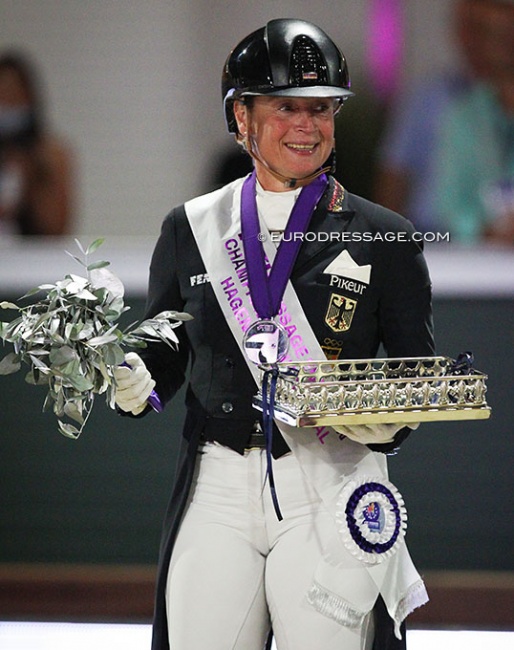 Isabell Werth dropped a bombshell when she announced to DPA (German Press Agency) that she will retire from competition sport after the 2024 Paris Olympic Games.

DPA published the article on Monday 13 September 2021 after a private interview with her at the 2021 European Dressage Championships in Hagen on the weekend.

Isabell Werth is the most decorated equestrian athlete in history.

While her biggest rival of the 2000s, Anky van Grunsven (NED), hung up her tailcoat in 2012 and will not make a come back to the arena, Isabell Werth kept on going and continued to garner more greatness, fame, and medals in the 2010s, most recently adding team gold and individual silver at the 2021 Olympics as well as team gold and GP special silver at the 2021 European Championships to her impressive collection.

Isabell Werth has never even hinted at retiring from sport, but in this interview she signals at the potential end of her competitive career.

Paris is a Turning Point

If Werth were to win another gold medal in Paris, she would beat canoeist Birgit Fischer as most successful Olympic athlete.

"I have no ambition to look at statistics," she explained. "I'll be 55 (in Paris) and I certainly no longer want to ride at the age of 60."

While Bella Rose is 17 and retired from sport and Weihegold will turn 17 in 2022, Werth is now looking at the future with upcoming talent.

She names the 11-year old Brandenburger stallion  Quantaz (by Quaterback x Hohenstein) as her 2022 World Equestrian Games hopeful and the 9-year old Hanoverian mare Superb (by Surprice x Donautanz) as a Paris prospect.

After Paris Werth hopes to continue as a trainer and prepare riders on her home team for the big tour.

"Training has always fascinated me," she told DPA. "I hope that my team at home will use the next three years to further establish themselves by then."