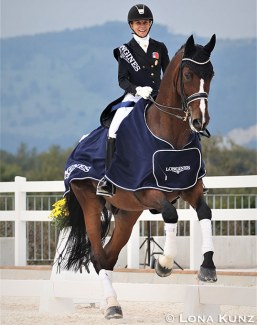 It was the last summer weekend with beautiful sunshine and the weather held right up until the last of the horses left before the rain came.

Seniors: Charlotte “Tiggy” Lenherr won her first Swiss Dressage Championship on 11-year old Sir Stanley W (by Stedinger x Florencio I) by scoring 74,85% in the Grand Prix Kur to music. She was in second place with a score of 69,88% in Saturday’s Grand Prix and it was close until the very end. Tiggy and Stanley delivered a solid Freestyle so it was up to the very last rider of the day, Carla Aeberhard and her 13-year old Swiss-bred Delioh Von Buchmatt (by Danone x Wolkenstein II). Their Kur to Music was good but the score of 74,11% was only enough to land them the silver medal, after having scored 70,08% in the Grand Prix. Estelle Wettstein took third place and the bronze medal on Quarterboy (by Quarterback x Rubinstern Noir), an 11-year old Oldenburger gelding, with a score of 73.09% in the Freestyle and 69,12% in the Grand Prix.

12 riders competed on day one, but the field was reduced to 11 after Patricia Schaerli’s Bailando II (by Rubin Royal x Weltmeyer) was unlucky and bit his tongue to show blood which meant elimination from the Grand Prix. U25 rider and fourth placed Charlotta Rogerson mixed well with the seniors and showed a lot of promise with scores of 69,28% in the GP and 72,63% in the Freestyle aboard her 11-year old Dutch warmblood (Zack x Krack C).

Lenherr is thrilled with her first Swiss senior Grand Prix title, especially after a season which pushed her to postpone her dream of representing Switzerland at a European Dressage Championships.

"I took myself out of team contention for Hagen because I had a dodgy ride at our last Selection Trials (CDI Herzlake) and I felt it was too early for us to do a Championship," Charlotte told Eurodressage. "The Swiss officials and Team Trainer were very understanding and encouraging. We went back to the drawing board, got our’ ducks back in a row’ and this is the happy result."

Young riders: Eight young riders competed in the two Championship rounds for the title. Milena Sulzer won the gold medal on 10-year old Westfalian bred Fantasimo (by Fioramo x Fidermark). It was a close race but she managed to stay ahead with a score of 74,83% in the Kur after ranking fourth in the first round with 67.50%.  Silver went to Laura Maria Grunder on 10-year Hanoverian gelding Rapace (by Blue Horse Romanov x Sandro Hit), who was first in the first round with 68.74% and second in the freestyle with 73.13%. Carl-Lennart Korsch took the bronze medal with the 9-year old Hanoverian mare Fantasy IV (by Furstenball x Don Crusador) after placing second in round one (67.92%) and fifth in the kur (70.52%).

Junior riders: The junior field was a group of 11 which had to compete in three rounds. Meilin Ngovan was a clear winner after having won all three classes. In the final, she rode to 78.07% which was the highest score of the show. Her solid performance throughout the weekend on her 9-year old Oldenburg bred Dreamdancer III (by Desperado x Quarterback) saw her over 6% ahead of silver medalist Layla Schmid on 13-year old Hanoverian Dujardin d’Arx (by Dancier x Akatschi). Bronze went to Tallulah Lynn Nater and De Vito W, a 10-year old gelding (by Desperados x Samba Hit II).

Pony riders: Seven pony riders battled it out for the title and routinier Layla Schmid took gold with the Belgian bred German riding pony mare Ashen Dew Drop (by Dornik B x Pavarotti). She convincingly won all three classes and scored 77,23% in the final in front of Robynne Graf aboard her 12-year old pony Dallas IV (by Dressman V x Donatelli). The bronze medal went to Sarah Demmler on her only 7-year old pony Dear Principal (by Dimension AT x Principal Boy).