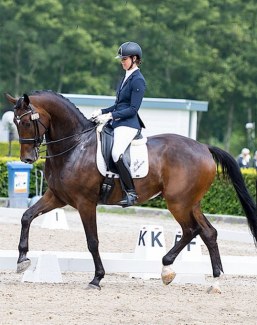 After the tragic loss of her top horse Grand amour, Canadian young rider Brooke Mancusi has new reason to smile: she found a successor in The Netherlands.

Bred by Adri Zekveld at brood farm Sollenburg in The Netherlands, the dark bay is a half brother to Da Vinci Sollenburg (by Vivaldi), who was competed at international young riders' level by Corinda Luttjeboer in 2017 and 2018.

As a foal he participated in the 2015 KWPN Regional Foal Championship and was second. Three years later the breeder and stallion owner Joop van Uytert presented him in the first phase for KWPN licensing in December 2017, but not accepted for the next round.

Kalisto made his show debut under new owner Janneke van Riet and finished fourth as a 4-year old in the regional talent show, Dressage Talent Berlicum. This year the pair placed 8th in the 2021 Dutch Dressage Championships at ZZ-Licht level. Kalisto was the only 6-year old competing in that division.

"I am super excited to announce the newest addition to my string of horses," said Mancusi. "I can’t wait for the future with this young amazing, talented horse!"