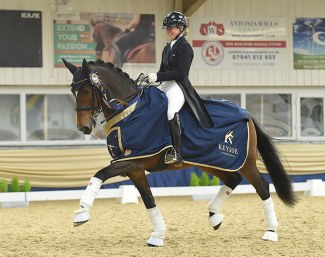 Three British riders each clinched a hat-trick of wins in the youth classes at the 2021 CDI Keysoe on 8 – 10 October 2021 with young rider Anna Dalrymple, junior Annabella Pidgley and pony rider Gracie Morgan all unbeaten at their respective level.

Fresh from a successful trip to Waregem CDI in Belgium, the relatively new combination of Anna Dalrymple (19) and Vagabond de Massa excelled on all three days of the Young Rider competition. They posted 70.39% to claim the Team Test, 70.53% to head the Individual before completing their Keysoe campaign with a Freestyle just shy of 75%.

“I wasn’t expecting it at all,” said Anna after returning home. “But he’s been really good in training since we came back from Belgium. He felt super in the arena familiarisation on Thursday, which gave me a lot of confidence to go in there and ride him how I know I can ride him at home, and he gave me everything he could in the ring, every single day. It was amazing. He was listening to me everywhere, every time, and that was a great feeling.”

Talking about the aspects she was most pleased with, Anna added, “We’ve been working hard on the canter pirouettes, and by the last day they were super…I was really happy with those, and we had some eights so it was nice to see the marks going up in the areas we’ve been working on.”

Anna works full-time for her trainer Sarah Millis and it was at Sarah’s West Sussex yard that she was first introduced to Vagabond de Massa (Reito x Xaquiro), a 12-year-old Lusitano bred by Sylvain Massa in the South of France, and owned by Maxine Vainio.

“Vagabond was stabled here with Sarah before he went to the States for a year to be closer to Maxine’s workplace, and then he came back. I was in need of a horse and she wanted him to be with a young rider and so it was just the perfect time.

“We trained together for a few months and it just went from there. I wasn’t expecting anything to happen the way it has done this season.”

Some well-deserved R&R is now on the agenda for Vagabond. “He’s having a holiday and then we’ll crack on with some winter training to get the marks up in other places.”

Second place in the Young Rider Team Test went to with Sophie Taylor with her seven-year-old Everdale son, Jerrydale (68.33%) with third taken by Charlotte Lutener and Full Fusion BS (by Blue Hors Zack) who occupied the runner-up spot in both the Individual and Freestyle.

A matter of weeks ago, Annabella and Sultan won the Advanced Medium Gold and the U21 title at the LeMieux National Championships, form they continued at Keysoe. They posted two 74%-plus scores to head the Junior Team and Individual tests in convincing style as well as fantastic freestyle, choreographed to music from Burlesque, to achieve the highest score of the show – 77.33%.

Annabella took to social media to say, “Sultan was such a superstar last week at Keysoe CDI where we won the Team test with 74% and the Individual with 74.6%. Sultan really had so much fun in his freestyle resulting in a few fresh moments but still finished with 77% and another win! I’m so glad that he’s feeling so fresh and happy after such a busy season.”

Morgan and Ella Make Their Mark

Before moving on to horses, and after a three-year journey that has taken her from being a novice 12-year-old to the European Championships in Poland this year, Gracie Morgan (15) from Bedale in North Yorkshire marked the end of her Pony career with a triple victory at Keysoe.

With Julie Morgan’s grey mare Ella (by Caesar 171 x Santano) – a full sister to George Clooney BS and her partner throughout the three years, she rode an outstanding Team Test for 72.42%, achieved 70%-plus in the Individual, and on Sunday a super 73.69% freestyle sealed the hat-trick. Myles Graham’s freestyle impressed also, for him to finish close second with Caron Robert’s Dresscode Cocktail (73.29%), whilst Ruby Hughes and Shirley Rixon’s Hilkens Showgirl completed the top three (72.12%).

“My last ever international representing Great Britain on Ella,” reflected Gracie on social media. “Ending my pony career with a hat-trick of wins! Still lost for words…”

Children on Horses classes, for riders aged 12 – 14 and at the equivalent of Elementary level, provide an excellent platform for young riders to gain experience in FEI competition, as was the case at Keysoe.

Lucy Caldwell got the Children’s competition underway with a high-scoring win in the preliminary test with Summer Foley’s Blue Hors Hertug son, Harmony Lox. Lucy (14) and ‘Harmony’, who certainly defies his 20 years, posted an impressive score of 73.48% from the judging panel of Mary Robins (NZL) at E and Knut Danzberg (GER) positioned at C.

Second placed Crystal Robinson Long (13) later celebrated a brace of wins with her Breitling W x Lauries Crusador xx gelding, Baldovino with fabulous scores of 73.70% and 73.23% in the Team and Individual tests respectively. She said on social media, “Last weekend Ernie (Baldovino) and I competed for Great Britain in the Children on Horses classes. OMG, having our National Anthem play whilst in the prize-giving was extraordinary. An honour and a truly amazing experience for both me and Ernie.

“It was also lovely to have the time to watch lots of other competitors and to be with friends. A great weekend. Thank you to everyone.”