Amanda Lindholm Nominated for 2021 Comet of the Year Award 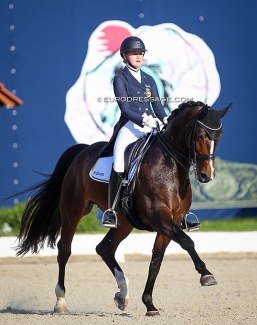 Swedish young rider Amanda Lindholm has been nominated for the Comet of the Year Award, which will be awarded at the 2021 Swedish Riders Gala at the Grand Hotel in Stockholm, Sweden, on 24 November 2017.

Each year Swedish equestrian magazine Tidningen Ridsport selects three riders from the three Olympic disciplines for the Comet of the Year award to honour the most successful Swedish shooting star of the year.

For the 2021 Comet of the Year award the nominees are show jumper Filippa Enmark, eventer Alice Andersen, and dressage rider Amanda Lindholm.

The 18-year old Lindholm lives in Bålsta, Sweden, and has been competing the 14-year old Swedish warmblood Rozette (by Rosevelt x Ragazzo) in the international young riders classes. Last year she won silver at the Swedish Junior Riders Championships and this year she got silver as a Young Rider. She also represented Sweden at the 2019 European Junior Riders Championships.

Ridsport motivated her nomination by stating that, "Amanda Lindholm has challenged herself by competing as a young rider a year early. Despite that, she has sailed up to the top tier in the ranking for Swedish riders under the age of 30. Amanda is characterized by a strong competitive drive, willingness to train and ability to follow a plan. The flame was lit by her victory in the pony competition at Friends 2017 aboard Holly's Cerwin.  After that, she and her family have spent all their free time and work on the farm in Bålsta for a a long-term competition career."