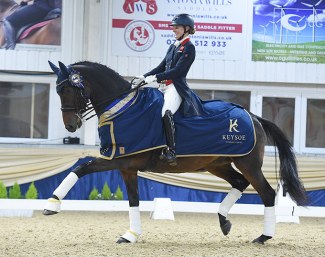 Lara Butler achieved a sensational double at the 2021 CDI Keysoe on 8 – 10 October 2021, claiming both the Grand Prix and Grand Prix Special with long-time ride Kristjan. Hayley Watson-Greaves and Rubins Nite won the Kur to music.

Fresh from two top-ten places and team third in the CDIO5* in Aachen, Lara Butler and the 16-year old Kristjan, owned by Laura Tomlinson and Ursula Bechtolsheimer and bred by the late Dr Wilfried Bechtolsheimer,  earned the top scores of 71.26% and 72.95% respectively for the Grand Prix and Special. The evergreen gelding, sired by Polarion who was one of Laura Tomlinson’s rides during her Junior and Young Rider years, made a great impression with his characteristic elegance, fluency and expression.

Lara, who has been riding Kristjan for almost a decade, took to social media to say, “Wow wow wow! What a champion Kristjan is, we won the Grand Prix Special with our best test to date! I felt he was a tiny bit reserved in the Grand Prix but boy did he step it up last night in the Special! So proud of this very special homebred!”

Back to Win After Two Year Hiatus

It was wonderful to see the combination of Hayley Watson-Greaves and Rubins Nite back in the limelight after two years away from the international stage. In April, Hayley and her husband Paul Logan welcomed baby daughter Elana to the world, hence she’s had some time away from top level shows.

A partnership we’ve all enjoyed watching over the years, their seven at top level have included numerous FEI Dressage Nations Cup™ appearances, top-five placings at Olympia CDI-W, an eleventh place in the 2018 FEI World Cup Final in Paris as well as being reserves for Rio.

Up for the job and raring to go, ‘Squeaks’ had a couple of costly mistakes to finish fourth in Friday’s Grand Prix, but really shone in Saturday night’s Freestyle with a beautiful test full of energy and in harmony with his rider to win on 74.15%. Music composed by Chris Lever complemented the powerful black gelding to a tee.

“With Covid and then being pregnant with our daughter we haven’t competed for a while, so it was fantastic to be back,” said Hayley. “It does feel like he’s my dancing partner, and he was enjoying it so much that I found myself smiling through the test.

“When I plait him, I play the music to him so he knows what's coming. As soon as I went in [down the centre line] he recognised it, which is amazing considering we've had another freestyle programme in-between.”

A combination to put up a good challenge in the Freestyle was Kate Cowell with Audrey Lawrence and Christine Richards’ Samba Dancer, a charming 15-year-old son of Samba Hit II who looked like he enjoyed every moment. Their programme, choreographed to a medley of Scottish music, was a pleasure to watch from start to finish.

Kate’s response on Facebook said it all; “No way José!” We came second in the Grand Prix Kür at Keysoe International CDI with 73%! A personal best and a dream come true! Samba Dancer you’ve been a little star and a total joy.”

Combinations on the rise impressed at Small Tour, with the international debutant combination of Lucinda Elliott and Hawtins Duchessa claiming the PSG (73.64%) and Inter I Freestyle (77.37%), whilst Sarah Rogers staked her claim on the Inter I with 72.70% aboard Laura Tomlinson and Ursula Bechtolsheimer’s homebred mare, Viva Lotta.

Judith Davis’s Hawtins Duchessa (by Decamerone x Don Frederico), a 10-year-old mare in her first year at Small Tour, has chalked up wins at Hartpury Premier League together with two second placings at the LeMieux National Championships and is certainly one to watch for the future.

“It was pretty special, and for the horse as well,” said Lucinda afterwards. “She [Hawtins Duchessa] tries so hard. We have a good connection, a good partnership, and she always gives a nice feeling.”

Lucinda works and rides for Hawtins Stud and trains with Serena Pincus. “Predominantly I’ve done young horses and what I’m finding now is that what I’m learning with the mares has helped me with the young ones,” she says, referring to Hawtins Duchessa, Hawtins Bellegra and Hawtins Soave, who are all competing with much success at Small Tour.

Hawtins Duchessa, known at home as Lilo, was winner of a Shearwater young horse title as a four-year-old under Bryony Goodwin, which is testament to the young horse series’ success in discovering future prospects.

Talking about her medium-term plans, Lucinda says, “We’d now like to go abroad to do some overseas internationals.”

Viva Lotta, a 10-year-old mare beautifully presented by Sarah Rogers, also has the makings of an exciting future prospect. High placings at Wellington CDI earlier this year followed by a top-three in the Saracen Horse Feeds Inter I Gold at Somerford were further reinforced with an Inter I victory here. “Our homebreds are really making us proud,” says Sarah.

In the under-25s divisions, Robyn Smith, from Glasgow, and her 13-year-old stallion Francesco 77 (by Florencio I x Sandro Hit) enjoyed a winning international U25 debut on a promising score of 66.70% in the Inter II.

Lewis Carrier and his FEI European Championships partner Diego V meanwhile added two further wins to their U25 tally by claiming the U25 Grand Prix and Freestyle with super scores of 70.87% and 72.10%.