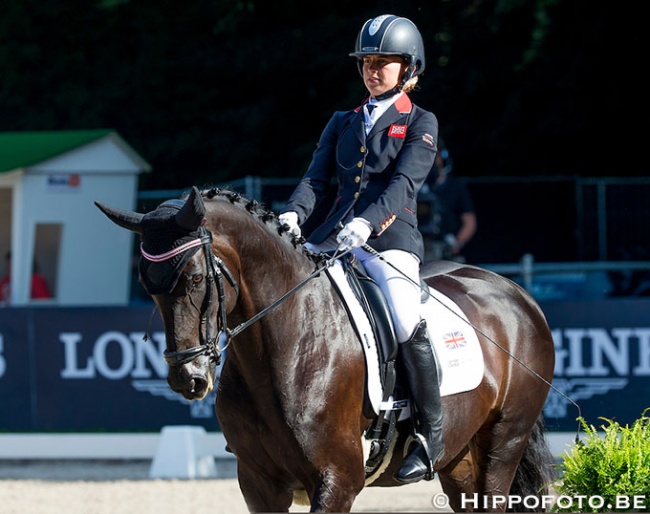 by Helen Triggs for British Dressage

Georgia Wilson and seven-year-old Sakura have been having the year of their lives. ‘Suki’ was only bought a year ago and has already taken Georgia to two Grade II bronze medals at the Tokyo Paralympics. They have now added three international 3* wins to their tally.

Georgia decided to take Suki to Keysoe after she didn’t settle well in the field in her post-Paralympics holiday. “I brought her back into work slowly but she soon got fully fit again,” commented Georgia.

Sakura, who was bred by Geri Eilberg, achieved a personal best score of 76.96% in the freestyle after a tack adjustment. “She was tugging on the reins a little in the first two classes. I have looped reins and can’t adjust them in the test so we lengthened them for the freestyle and she went beautifully.”

Suki will enjoy another short holiday back at home in mid-Wales before training through the winter and a return to Keysoe for the para international in March.

Georgia’s lovely parents, Geoff and Julie Wilson, sold their motorhome to fund Suki’s purchase – what a great gesture and the chestnut mare has repaid them in full with her success.

Fresh from her Grade III win in the Para Gold Championships at the Nationals, Erin Orford and LJT Diamond Crusader won all three of their 3* classes, improving their scores throughout the competition. The eight-year-old Diamond Hit gelding recorded some of his best scores in international competition.

“I’ve been building up his power and cadence in the trot for the last few months,” said Erin, who, like Georgia, trains with Paralympian multi-medallist Sophie Wells. “Now I’m working on getting it in the arena – it’s getting the balance right and him being soft within it. At Keysoe I felt him step up a gear and I got a really good balance of softness and power.”

Erin plans to do more able-bodied competition with ‘Loki’ over the winter at Medium and Advanced Medium level before beginning her campaign for selection for the World Equestrian Games. “It’s something different for him and a challenge for me as well.”

Irish Paralympian Michael Murphy left his Tokyo ride, Cleverboy, at home to concentrate on his younger horse, Dark Diamond (by Don Crusador) and was pleasantly surprised to win all three Grade I 3* classes, with all scores above 73%.

“I’ve only had him for a year and the goal was for him to get some experience. I know he’s got a lot of quality but I didn’t expect it to come out so soon!” commented Michael. “He’s got a dream temperament – super chilled and laid back. He’s got everything you would want in a para horse.”

‘DD’ was found for Michael by his trainer Elder Klatzko. “As soon as she saw him walk, she snapped him up. I’ll bring him on slowly and he will eventually take over from Cleverboy. For the moment, he’ll concentrate on national shows.”

Greenhill and Naylor Battle it Out

Nicky Greenhill’s Betty Boo (Benetton Dream x Londonderry) has won 12 out of 14 of her last competitions, including wins at Hartpury International and Wellington Premier League. The pair won the Grade IV Team and Individual 3* tests, while Nicola Naylor and Humberto L won the Freestyle.

“Betty was fantastic,” enthused Nicky. “Her Individual test on the second day was the best she’s ever done. For the Freestyle she was a bit tired. She’s so reliable and consistent and lovely to work with. She’s had a couple of injuries and had to rehab but it’s all coming together now.”

Nicola Naylor’s Cachet nine-year-old has had a successful season, winning the Advanced Medium Freestyle at Bury Farm Premier League in August and the Grade IV class at the Para Gold Championships in September. Their Freestyle score of 73.49% was a personal best.

Cundall On Top in Grade V

Charlotte Cundall has had a lot of success this year with LJT Simply Red but it was FJ Veyron she brought to Keysoe to win all three Grade V 3* tests. ‘Duke’ was the Grade V champion at the Para Gold Championships and also placed third at the Port Royal Summer Regionals at able-bodied medium silver level.

With plus-72% scores in the Individual and Freestyle tests, Duke is on flying form. “I was thrilled with him,” said Charlotte. “The German judge had him on 74% in the Individual test which is uncharted territory for us! He really tried and did everything I asked him. We’re growing in confidence as a partnership. He’s not spooky but is definitely ‘whoah’ not ‘go’. He always wants to please.”

Duke is owned by the Veyron Partnership syndicate and arrived with Charlotte at the beginning of the first lockdown in 2020. “It gave us time to get to know each other and do lots of hacking.” Charlotte plans to do more able-bodied competitions over the winter to expose Duke to some bigger venues.

Wonnacott has been Mr Consistent this year for Grade III 1* competitor, Zoe Squirrell. He topped the leaderboard at Bishop Burton CPEDI 1* and won at the Para Winter Championships.

“He’s 18 years old so we don’t have to drill the movements [in training], just work on suppling exercises,” said Zoe, who consistently scored over 68% in all three tests. “It was really pleasing that each day had a different set of judges and the marks were consistent. He’s never going to be a flashy horse but he’s consistent and that’s what I need right now. I owe him and his owner, Alice Pearce, a lot for giving me exposure to this level of competition. I can only get to ride him a couple of times a week and Alice puts an enormous amount of work into both of us.”

In the 2* competition, Sara Bates won all three Grade IV classes with Solo Hit 2 who was bought at the beginning of the year. “He’s trained to Inter I but he isn’t as easy as everyone thinks he is. His brain was fried before I got him. I’m having to teach him that we just need the basics and he’s got to learn to cope when I lose my balance. He’s got a lovely temperament and there are little improvements every day,” said Sara who has MS. Despite this, she also competed her 12-year-old homebred Tango in the 3* competition. She trains with Steph Eardley and Michael Eilberg.

Sara paid tribute to her husband and three children for making her para dream possible.

Vicky Nurcombe and 14-year-old Celano were at their first international together and the highest score of 69.80% in the 2* Novice A competition.

In the 1* competition, Sara Cooper and her 19-year-old PRE, Seni-Lliso I (by Deseado XXIX) won all three of their Grade II classes. She later wrote on Facebook: “What can I say, my first international was amazing.

“I went with minimal expectation, anticipating to be outclassed but going for the experience. Lluso had different ideas!

“We placed first on each day we were there. He was faultless, and pulled out three lovely tests and really held my hand, with scores up there with very classy big moving horses all around him. In the Freestyle, one judge had us on 71%!!

“It’s been more than I could have dreamed of, it still feels surreal that I have the letters GBR next to my name. As always, I owe everything to the amazing team at Lakefield Equestrian Centre.”