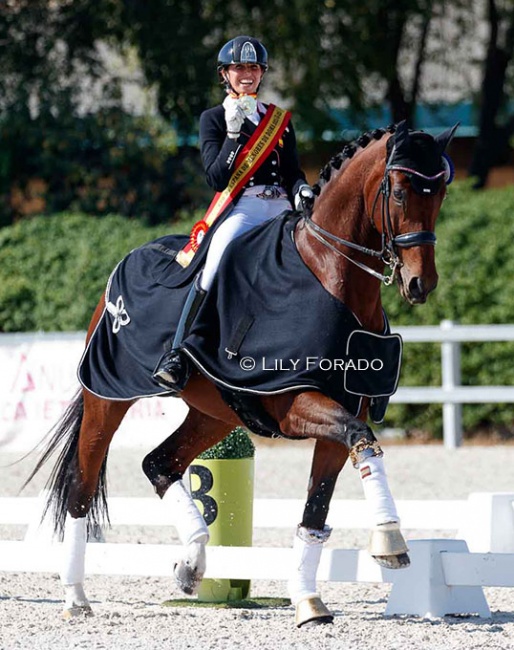 On Sunday 17 October 2021 the fifth edition of the Spanish Under 25 Championships ended with the new champion of 2021 being crowd. Las Cadenas near Madrid once again hosted this championship with great success.

A total of 12 riders fought the battle for the title, but one of them stood out from the rest: Barcelona based Cristina Wagemans on her 12-year-old KPWN Ellington (by Jazz x Silvano N). She was undefeated and claimed her second title in a row.

This year the Under 25 National Championships were held separately from the Spanish Youth Riders Championships, which took place in August.

After two days of pure excitement in the Intermediaire II and Short Grand Prix, the third test - the Freestyle - put the finishing touch on the Championship. With the first combinations doing their respective dance strides, the great moment of the afternoon were the last five performances.

Juan José González de las Cuevas riding the 11-year old Oldenburg Denskport (by De Niro x Rubinstein) went for it. His presentation was magical. The rider from Extremadura was stringing exercises with great precision and elegance. One of the exercises that caused a delirium were the changes every two strides in circle.

Everything seemed favourable for the rider to take the lead in the Kur, but just at the end, the judges met with the President of the Jury. It turns out that, Juanjo executed two and a half pirouettes, when maximum two in a row are allowed. This slip was translated into a massive loss of points and consequently his chances of fighting for the bronze metal were wiped out.

With a tremendous entrance, a double canter pirouette, followed by one tempis  and again another double pirouette to the sound of Madonna's “Like A Prayer," Adrián Roldán and the 11-year old KWPN gelding Floyd (by Rousseau x Farrington) started out strongly.  His musical compendium of pop tunes like "Take On Me" or "Crazy In Love" by Beyoncé were in unison with each of Floyd's strides. His final average was 69.655% after a fourth place in the freestyle.

Alfonso Ramírez with the 13-year old Hanoverian gelding Cuba Libre (by Concetto x Falkland) did not disappoint. To the beautiful melodies of “Two Steps from Hell” the Andalusian rider shone in various exercises. His 70.560% score placed him in the third position in the kur.

As the penultimate rider to go, Diego Martinez Del Moral with the 13-year old Hanoverian stallion For Olimpic Games (by First Dance x Florestan)  managed to transport us to the time of war. To the sound of the soundtrack of Arthur King, composed by Hans Zimmer, his powerful music and solemn drama was Diego's best weapon.   The voices of Andrea Rodríguez and Sergio Morón set the tone “Entering the Ring” and Diego began his fight dance for the medals.  Diego received a 70.690% becoming the runner-up of the musical test.

After Diego's imposing dramatic freestyle, the Cadenas loudspeakers echoed the final piece of poppy music. Agustí Elias' student Cristina Wagemans Rovira danced to one of her favourite artists, Ariana Grande. The famous songs from “Love Me Harder“, “Breath In ” or “ Rain On Me” rumbled in the background. Prior to the last center line, Ellington performed a jaw-dropping canter extension to continue with a piaffe pirouette: “Flawless”.

As a clear favourite from the beginning, Ellington showed strides that were golden from minute one.  Without surprises, Cristina won the Freestyle and also the Championship. The icing of the cake of her 2021 show year and a golden farewell from the U25 division. Next year Wagemans will be a senior.

For second year in a row and with a different horse, Cristina fulfilled one of her dreams:  to attend the European Championships and become the new champion of Spain. Wagemans says goodbye to the U25 category with the cherry on top of the cake: Champion of 2021. While in 2020 she rode Dream Boat, in 2021 she had Ellington as her equine partner.

"Winning this medal for the second time in a row means so much to me," said Wagemans. "I bought Ellington two years ago. He was doing Small Tour and we set several goals:  reach the U25 division and attend the Europeans.  I couldn’t be prouder of our results!! Being able to compete in this level has been an amazing preparation for the Senior class. I think the U25 class is great to learn how to ride a Grand Prix, so then the change to the Seniors is not so harsh. To end the season like this is a dream come true. Last year I had Dream Boat BCN and for me he was the best opportunity to learn from him.  This year with Ellington has been amazing.  Shout out to my mom and Agustí for believing in me and helping me get where I am today. It wouldn’t have been possible without them."

After the scores of the three rounds were totalled Cristina Wagemans grabbed the title and gold medal. Diego Martinez was runner-up with a 205.208% and Adrián Roldán closed the podium with a bronze medal on 205.138%