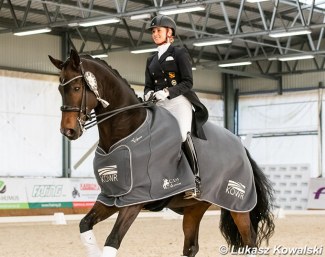 While in Western Europe some autumn CDI's are getting cancelled due to a lack of entries and oversupply of shows since the spring of 2021, the Central European League World Cup qualifier and indoor CDI in Zakrzow, Poland, had no such worries.

A packed field from pony level to Grand Prix made the show buzz with excitement on the weekend of  21 - 24 October 2021.

Zakrzow was the horse's first World Cup qualifier with the new short Grand Prix test as warm-up round. It was not yet smooth sailing with this quick and difficult programme. They placed sixth with 70.658%. In the freestyle, however, which can be tailored to the horse's ability and strength, Werndl rose to the top of the board and won the World Cup qualifier 78.770%

"Ferdinand saw a few Halloween ghosts in the first test in Zakrzow. He was really scared at the beginning and that was really difficult. During the test it got better and better and he left the arena with a good feeling. Fortunately, the spook was over on the second day," Jessica explained.

When comparing the ranking of the Short Grand Prix with that of the Freestyle, the placings were very much reshuffled.

The winner of the Short Grand Prix was Austrian Christian Schumach on Franziska Fries' 10-year old Holsteiner bred Te Quiero SF (by Totilas x Loutano). In his first year at international Grand Prix level, the bright bay has had a busy programme starting his Olympic campaign in May in Ornago, followed by the CDI Achleiten, then flown to Tokyo for the Olympics and the European Championships six week later. Two weeks after Hagen the horse won the Austrian Grand Prix Championships. Another two weeks later he was trailered to Poland for his first World cup qualifier. Schumach won the Short Grand Prix with 72.342% and placed fifth in the freestyle with 75.765%.

At the Austrian Championships, Schumach said that Te Quiero would go back to owner Franziska, but instead he took the Holsteiner to Zakrzow.  "At the beginning of the season 2021 we decided that Christian will ride Te Quiero during the whole season and that i am going to take over the reins in winter," Franziska told Eurodressage. "Christian did a fantastic job and Te Quiero was able to gain a lot of experience. At the beginning he had no self confidence and sometimes it was a difficult way, but now he is such a superstar and it's a pleasure to work with him. It was the best decision and I am more than happy with the development. Zarkzow was the(ir) last competition."

Australian Kristy Oatley and her 17-year old Hanoverian Du Soleil (by De Niro x Caprimond) have been on a lighter programme this year with the liver chestnut showing in Zakrzow in Paurl and the CDI Verden in May after which Oatley skipped the Olympics to focus on her daughter Rose's pony career. Returning to Zakrzow, Oatley and Du Soleil were fifth in the Short Grand Prix with 70.710% and runners-up in the freestyle with 77.575%