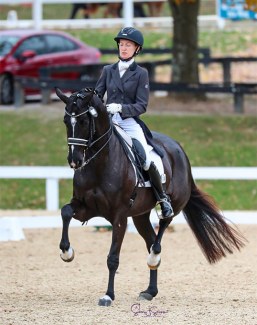 After a year away due to the COVID-19 pandemic, horses and riders from across the country once again have descended upon the Kentucky Horse Park in Lexington for the 2021 US Dressage Finals held on 11 - 14 November 2021.

The USDF Finals is the annual American dressage championships hosted by the United States Dressage Federation (USDF) mostly for amateur and non professional dressage riders. The USDF Finals were first held in 2013. The high performance national dressage championships from pony level to Grand Prix are hosted by the United States Equestrian Federation (USEF) and those take place in August.

After the disappointment from cancellation of the 2020 event, anticipation for a return to the Finals stage had reached a fever pitch, and even with COVID-19 protocols still in place on the grounds, there is no denying the excitement of competitors, officials, and volunteers to be back in the Bluegrass.

With entries representing all nine USDF dressregions from coast to coast, the record-breaking participation numbers prove that that the Finals are back, bigger and better than ever. The number of horses on the grounds for this year’s Finals increased by almost 50% from two years ago to a total of 538, and the number of rides increased a whopping 55% (from 541 in 2019 to 839 in 2021). In addition, the 379 riders participating in this year’s event reflect an increase of 25% over the previous Finals – a total which doesn’t include an additional 67 youth competitors who are competing for national titles for the first time in the new Junior/Young Rider divisions for Training through Fourth Levels.

Championship competition got underway on Thursday with two national FEI level titles on the line, even as horses and riders faced challenges from a cold front which began working its way across the Bluegrass in the afternoon.

Despite high winds and storm clouds brewing over the Claiborne Arena, Alice Tarjan of Oldwick, N.J. (Region 1) and her nine-year-old Hanoverian mare Serenade MF (by Sir Donnerhall out of Duet MF by Don Principe, bred in the U.S. by Maryanna Haymon) were unfazed by the weather and dominated the Intermediate II Adult Amateur Championship division, earning the unanimous win under all three judges with a total score of 72.598%. After being crowned as the U.S. Developing Horse Grand Prix Dressage National Champions at the U.S. Dressage Festival of Champions in August as well as recently being named the 2021 USDF Horse of the Year for Intermediate II, Tarjan and Serenade MF capped off their spectacular season with one final national title.

Sheltered from the weather in the comfort of the Alltech indoor arena, an impressive field of 23 riders from across the country battled it out in the Intermediate II Open Championship.

Ultimately emerging victorious with a winning score of 71.422% was Region 8’s Heather Mason (Lebanon, N.J.) who successfully defended her 2019 title at this level with her own 16-year-old Oldenburg/Holsteiner gelding RTF Lincoln, a horse she’s known since he was a foal. The pair will now move on to compete in the Grand Prix and Grand Prix Freestyle divisions later in the week.

“It feels great to be here and he was super today,” said Mason. “The last month has been rough with a foot abscess so we’ve only had about five rides in the last three weeks. But he’s definitely matured, is getting more and more solid in the work, and I’m getting better at managing him. This Intermediate II test was a great way to start the weekend and build his confidence.”